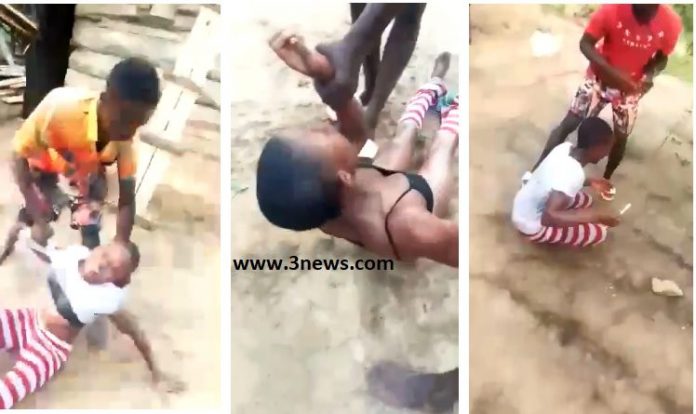 A 15-year-old Class Six girl has been flogged while almost naked by two men contracted by her stepfather.

Her ‘crime’ was failing to sleep home.

The incident occurred at Ofoase in the Akyemansa District of the Eastern Region.

The video sighted by 3news.com shows two young men getting hold of the 15-year-old while she was brushing her teeth.

She was forcefully stripped naked, beaten and her private part manhandled on the orders of her stepfather as a punishment. All this was being recorded.

The victim later narrated: “I went to sleep at my friend’s house. I was brushing my teeth when the boys poured water on me and started beating me on the orders of my father because I didn’t sleep home. One said if I have had sex with him, they wouldn’t have beaten me. The other inserted pepper in my private part. I promised reporting them to the police, but my step father was not bothered.”

“Yes, we have such a case. We took the child to the hospital. She is doing well.”

Asked if the perpetrators of the act have been arrested, he said they were yet make any arrest.

“They are still at large, the matter has currently been taken over by the Oda Dovsu Command.”

The Children’s Act 1998 Section 13 (1&2) is clear on the child’s right on protection from torture and correction limit.