Home Politics ‘I’m too expensive for sale; nobody can afford to bribe me’ ...
Facebook
Twitter
WhatsApp
Linkedin
Telegram
Print 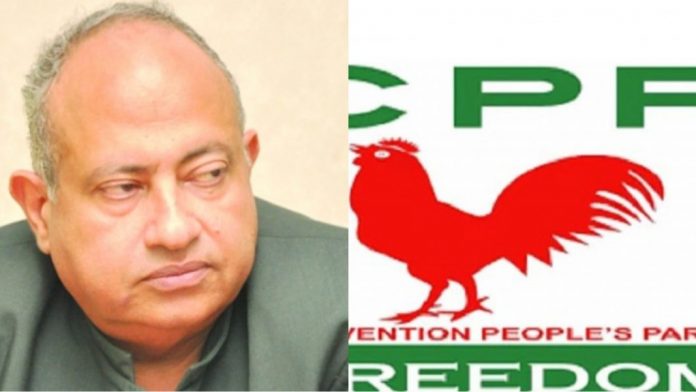 The first son of Ghana’s first president, Osagyefo Dr Kwame Nkrumah, who is the 1st Vice-Chair of the CPP, Onsy Kwame Nkrumah, has said unlike some of his colleague executives, he is too expensive to be bribed.

Speaking on how to revive the CPP ahead of Nkrumah’s 113th birthdate tomorrow, his son noted friends from the Europe and America have always pursued him with the need to come and reawaken his father’s party which is something he is determined to do.

However, some executives of the party currently are in bed with the government and the main opposition party making the quest for a formidable force a mirage.

When asked if he can also be possibly influenced one day like his colleague executives as he claimed, he said “nobody can afford to bribe me because I’m not for sale. I’m very expensive.”

Meanwhile, he opines the possibility of attaining the dream of reforming the party is a two way affair.

“The possibility of cleaning the party or not is 50 50. Friends in America, Europe ask me why I don’t go and reform my father’s party.

“The other parties sponsor people inside the CPP so we have a microcosm in the CPP. They accept monies and are sponsored but they won’t come out to say,” he emphasised.

These allegations have earlier been made by Captain Smart as part of his series of vilifying the CPP leadership to revitalise the party to become the country’s third force to battle the NPP and NDC for power, even though he did not mention any names.

“Nana Frimpomaa lost but she carries herself as Chair of the party. She is one of the peoples sponsored by the NPP. Unfortunately I didn’t know and I used to be close to her. Two if the officers were aware. She has been given GH₵2.7 million, a V8, two pick ups and 20 motorbikes.

“She kept the cars –the V8 she is using and the pick ups for the party’s use –money, motor bikes I didn’t know I was sidelined. She said it was given to her in her personal capacity.

“₵2.7m she has kept. Some of the money was collected in bags and two of the executives helped her carry it and subsequent ones in her account. Others to her son whom she has appointed a position in the party,” he told Captain Smart, host of Maakye on Onua TV/FM.

[PHOTOS] Queen Elizabeth II: Check her full name and some moments she shared with some presidents from Ghana

Show us your father’s achievement for Ghana – Captain Smart to Akufo-Addo, others