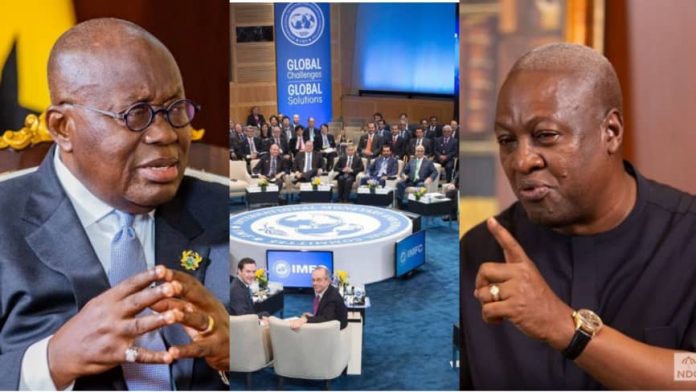 Economist and Political Risk Analyst, Dr. Theo Acheampong, has advised the NPP to stop justifying government’s resort to the IMF with external shocks.

He says the “value is pretty similar in terms of the intent” and managing an economy includes averting external shocks when they pop up.

Dr. Acheampong posted the statement on his social media handles sighted by Onuaonline.

Following government’s decision to seek a bailout from the International Monetary Fund, party communicators and officials of the ruling government have tried justifying the decision with the war and the pandemic.

But, the weakness of the Ghanaian economy, according to Dr. Acheampong, is the real exposure the COVID-19 and the Russia-Ukraine war brought to bare which must be discussed.

His admonishment is for the propaganda to be stopped “and get real on solving the problems.”

Below is the full write-up posted by Dr. Acheampong.

One thing that irks me: that the NDC’s IMF program is different from the NPP’s potential IMF programme. This Russian-Ukraine war and COVID excuse as the leading cause is over-flogged. Dealing with external shocks is part of managing an economy. Both events have affected all countries globally, some of whom have been able to withstand better than others.

I’ve always said that COVID and the Russia-Ukraine war only exposed the soft under-belly of the Ghanaian economy: excessive liberalisation, debt binging and not having built enough fiscal buffers. That is the real issue we should be debating!

So, whether NDC IMF ooo or NPP IMF ooo, the value is pretty similar in terms of the intent: you have a pending balance of payments issue (FX crisis), the causes of which are very structural.

Both of the these two parties have indicated and went to the IMF, albeit the latter now at early stage negotiations. Let’s stop the propaganda and get real on solving the problems.