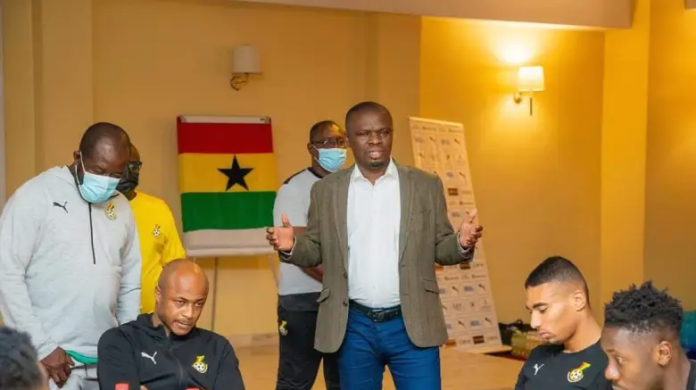 The Black Stars of Ghana suffered a shocking defeat to Uruguay in their last group game which ended Ghana’s dream in the 22nd edition of the Mundial.

The stars, who headed into the game with three points after losing their first match to Portugal and defeating South Korea needed a draw to qualify if the Portuguese had won South Korea.

However, because the South Koreans defeated Portugal, Ghana needed a win to sail through to the round of 16 but were thrashed by 2 goals to nil, after Captain Andre Ayew failed to connect a spot kick awarded the Black Stars in the early minutes of the game.

Beyond the performance on the field have emerged issues that popped up before the game took place Friday, December 2, 2022.

Morning Show host, Blessed Godsbrain Smart, on his show –Maakye –Monday, December 5, 2022, revealed there was a juju man at the Black Stars camp the day before the match day –Thursday.

According to Mr. Smart, the juju man is a spiritualist for one of the players who informed the supposed player that Ghana was going to lose against Uruguay due to what some old players have done against him (the player they played with in the team, whose spiritualist was in the camp).

“What was the juju man in the Black Stars camp the day before the match doing there? He went there to tell the person he does spiritual things for, that the game was lost already.

“He told him there are some five old players who used to be in the team that are bitter with him and they have worked against him so there is no way the team will progress. So the player texted the five old players and begged them to forgive him for any wrong they have done against him. But it was just a day ahead of the game so it was too late.

“The five old players also have their own boys in the current team so they told them to lose the game. When the Black Stars lost to Uruguay, they sent themselves messages, that ‘Afa’ to wit it is done. So instead of being sad over the loss, they were jubilating.

Meanwhile, Captain Smart has proposed that every player that has been in the Black Stars and played the last AFCON at least, be expunged from the team before there could be any progress. He says only those who had their first callups to the team, courtesy this world cup, be maintained in order to restructure the team beyond personal grudges.