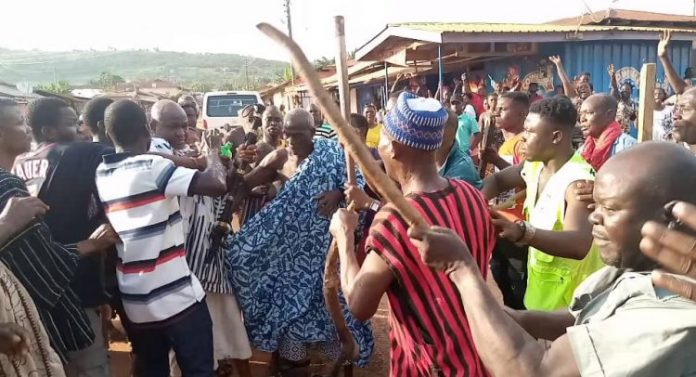 Communities in the Lower Manya Krobo Municipality of the Eastern Region have been plunged into darkness for some time now due to activities of people the chiefs have referred as saboteurs.

Electricity Company of Ghana (ECG) staff who tried fixing some metres that have been tampered at Nuaso were attacked by the residents.

The staff have therefore refrained from the maintenance calling for assurance of their security before fixing the faulty metres.

Meanwhile, the Manya Krobo Traditional Council in a statement has asked residents in the Municipality to desist from any form of molestation and harassment of ECG workers.

The caution is to assure ECG workers of their safety and get them back to work on the faulty metres which has plunged the community into darkness.

For some days now, residents have been without electricity. As at Thursday evening, July 28, 2022, residents were still without power.

Residents have resorted to generators and rechargeable lamps to do businesses.

The Traditional Council has in a statement warned those behind to desist from the act.

“A group of clandestine saboteurs have gone to cause damage to a few transformers at Nuaso Town and Kpongunor. The Internet fibres connecting ECG area office at Kpongunor were also cut by these saboteurs”

“On Friday, July 2022, ECG workers were nearly attacked at Kpongunor. Currently the lives of the ECG workers are a concern to us because of the behaviour of these people. Hence they have refrained from working on the faulty transformers without concrete guarantee from the communities. If this attitude continues then whose fault is it if you are in the dark. We must value their lives too,” the statement indicated.

The Council also warned extortionists who seek their self interest to stop peddling themselves as community leaders.

Managing Director of the ECG, Dubik Mahama, in a media engagement in Accra says some GH₵168 million worth of Electricity has been consumed by residents in Lower Manya and Yilo Krobo Municipalities for the eight year period.

The residents of Lower Manya and Yilo Krobo have been at war with the ECG since the power distribution company decided to change the postpaid metres in the area to prepaid following some debts they owed.

Due to the resistance from the residents, the ECG had to embark on the exercise with the military.

But, the installation of prepaid metres by the ECG with assistance from the Military have been met with resistance by residents.