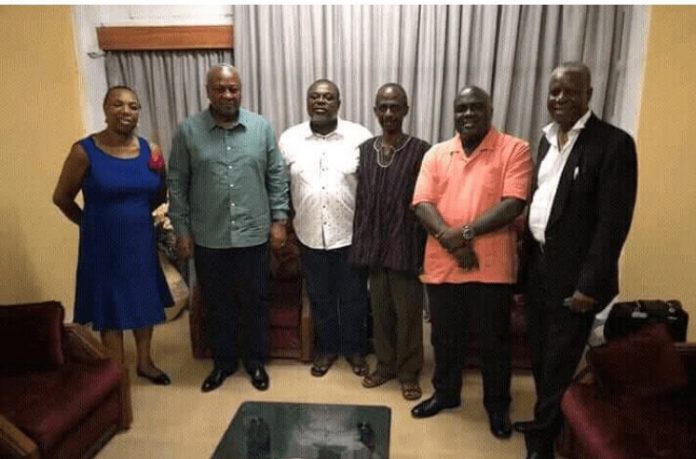 A member of the legal team of the National Democratic Congress (NDC) Gordon Edudzi Tameklo has told a former Deputy General Secretary of the NDC Koku Anyidoho who has been suspended from the party that he must show gratitude to former President John Dramani Mahama for helping ensure his liberty from the cells of the Bureau of National Investigation (BNI), now known as the National Intelligence Bureau (NIB).

Edudzi’s comment comes after Mr Anyidoho has made insinuatios in opposition to Mr Mahama although he doesn’t mention the name of the NDC’s presidential candidate for the 2020 polls in those comments.

For instance, his recent tweet on Saturday August 7 said “Jerry John Rawlings built the NDC: John Evans Atta-Mills re-built the NDC! Some pretender; who came from the Peoples Heritage Party (PHP), in 1996, as an opportunist to join the NDC thinks he/she can destroy the NDC? Torfiakwa Folded handsFolded hands”

Another tweet said “This is the front page of the White Paper on the Report of the CRC set-up in the name of the Republic of Ghana Flag of Ghana.  Who took over from President Atta-Mills & sabotaged the Better Ghana Agenda of President Atta-Mills and NDC? The anti-party people shall be greatly exposed.”

Reacting to Mr Anyidoho’s tweets in a Facebook post, Gordon Edudzi Tameklo said “From abroad straight to the BNI to visit then arrested Koku Anyidoho and the behind the scenes moves to get him released. Thankfully I personally involved in some of them. John Mahama has the cleanest heart. Gratitude is life itself.”

On March 28, 2018, Mr Mahama visited Koku Anyidoho who was in the custody of BNI on a charge of treason felony.

Mr Anyidoho was arrested Tuesday following a statement he made on Accra-based Happy FM that President Akufo-Addo was likely to suffer the fate of his father who was overthrown as President by a military coup in 1972.

“Somebody should tell Nana Akufo-Addo that history has a very interesting way of repeating itself,” he said.

The former presidential spokesperson for the Late President Atta Mills said “On the January 13, 1972 a certain Col. Ignatius Kutu Acheampong led a movement that removed the Progress Party from power.

|Busia was the Prime Minister and Akufo-Addo’s father was a ceremonial president. Somebody should tell Nana Akufo-Addo that history has a very interesting way of repeating itself. There’ll be a civil revolt. There’ll be a people’s movement. During President John Mahama’s tenure didn’t we receive similar threats from the likes of Let My Vote Count and OccupyGhana,”

“There’ll be a civilian coup d’etat; there’ll be a social revolution and the movement is starting on Wednesday. He [Akufo-Addo] will be fed up at the Presidency.”