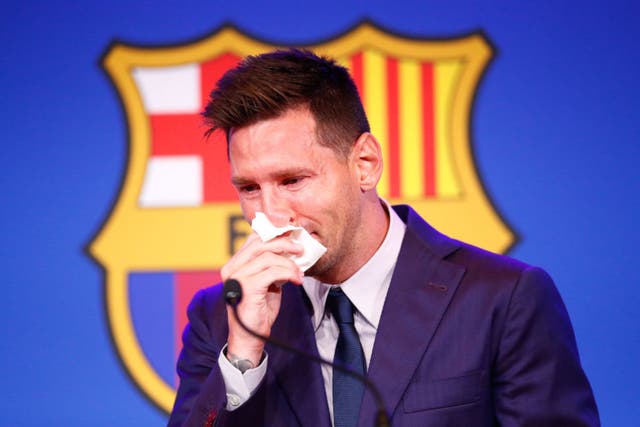 An emotional Lionel Messi said joining Paris St-Germain was “a possibility, but nothing is agreed” as he confirmed his exit from Barcelona.

Messi is ending his 21-year association with Barca, who cannot afford to honour the new contract they agreed with him because of La Liga’s salary limit.

“My family and I were convinced we were going to stay here, at home,” he said during a news conference on Sunday.

The Argentina forward added: “This is the end with this club and now a new story will begin. Yes, it’s one of the most difficult moments for me.”I don’t want to leave this club, it’s a club I love and this is a moment I didn’t expect.”Last year I wanted to leave, this year I wanted to stay. That’s why I’m so sad.

“It was like my blood ran cold. I was really sad. It was really difficult right up to now. I’m still trying to process it all.

“When I get home I will still feel bad; it will be even worse. I’m not ready for this.”

Messi, the club’s record goalscorer, submitted a transfer request last summer before agreeing to stay for the final year of his contract.

That expired on 1 July and Messi is now in talks over a move to PSG, where he would play alongside Kylian Mbappe and former Barca team-mate Neymar.

“It is a possibility, but I have not agreed anything with anyone,” he said. “I have got different clubs interested. Nothing is definitive but clearly we are talking to them.”

‘I always thought he was better than him, but after I trained with him, I knew I was right’ – Vincent Aboubakar