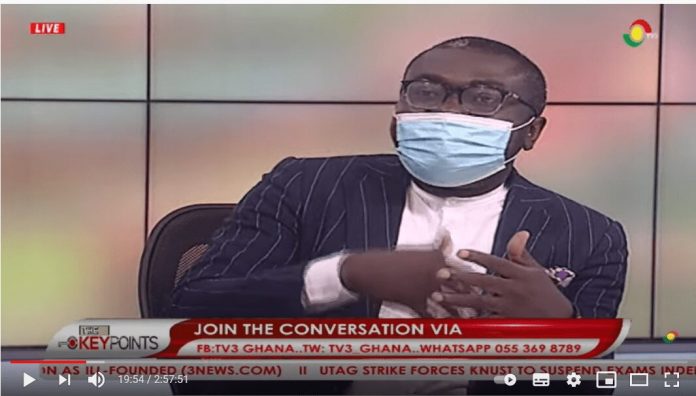 A convener of the Fixthecountry demonstration, Oliver Barker-Vormawor, has said that he is not surprised that the government has not reacted to the demonstration that was organized on Wednesday August 4.

He told Dzifa Bampoh on the Key Points on TV3 Saturday August 7 that the government was not their target audience, rather the people of Ghana.

Hundreds of Ghanaians joined the fixtehcountry demonstration in Accra to demand better conditions of service from the leaders.

Asked whether they are surprised that there has not been any reaction from the government four days after the protest, Oliver Barker-Vormawor said “this conversation around fixing the country and the issues we have been raising have been in the public domain for almost four months now so, I am not expecting that the demonstration must provoke a reaction from them.

“A lot of people do but I do think the way in which the issues should be reacted to should start and pre-date the demonstration.”

He added “The president has barely spoken about this issue.

“The conversation we want to have is with the people of Ghana themselves, they own the democracy and the process must engaged them so there is really no rush on our end and we don’t see it in any particular way as a failure on the part of government that they haven’t spoken to us because they are not our audience for this process.”

A former Deputy General Secretary of the Ghana Medical Association, Dr Sodzi Sodzi Tettey also said he was not in the demonstrating against the Akufo-Addo administration.

He said on the same show that that he was protesting against the general hardship and the ills in the society in general.

“Thankfully the president said we should be citizens and not spectators and that really should be the mantra when we hold them accountable.

“Most of the time our politicians think they can get into the space and make all the declaration to you but there is no follow up, there is no accountability. I even if they do it what happens? So we need to not get tired, we need to stay engaged and we need to hold them accountable at all times.

“In fact the demonstrators slammed all of the political leaders since 1992 the only person who was praised was President Nkrumah so it just tells you the focus. I think that we should divorce it from some of the partisan sentiments.”