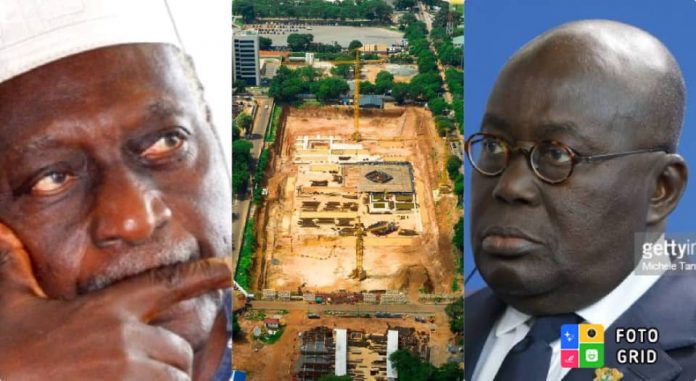 The discussion on Ghana’s National Cathedral continues unabated following the developments that are emanating out of the monies being churned into it by government.

Despite the declaration that the Cathedral was a personal promise to God and not a state project, President Addo Dankwa Akufo-Addo has so far pumped a whooping GH₵200million state fund into it.

This has got many talking considering the properties that were wasted and the monies still being wasted to temporarily seal the hole that was created. Bungalows belonging to Justices of the country were pulled down and are now being rented for at a cost of $5,000.00 per month.

Meanwhile, new places are yet to be secured to replace the bungalows that were pulled down.

After questioning the Board of Trustees on the whereabouts of his cement, Captain Smart, host of Maakye on Onua TV/FM has sparked the spirit in the words of Prof. Kofi Awoonor’s poem on the Cathedral.

Even though authored somewhere in 2012 when President Akufo-Addo had not even become the first gentleman of the land, juxtaposing the circumstances surrounding the building of the Cathedral and the letters in the late poet’s poem leaves one nothing than to conclude Prof. Awoonor predicted the controversies entangled with the National Cathedral.

The poem reads:
“On this dirty patch
a tree once stood
shedding incense on the infant corn;
its boughs stretched across a heaven
brightened by the last fires of a tribe.
They sent surveyors and builders
who cut that tree
planting in its place
a huge senseless cathedral of doom.”

Smart, together with Appiah Kubih translated the mouthpiece for Ghanaians to access the similarity or otherwise with the brouhaha on president Akufo-Addo’s personal-promise-turned-state-project on Monday, June 20, 2022.