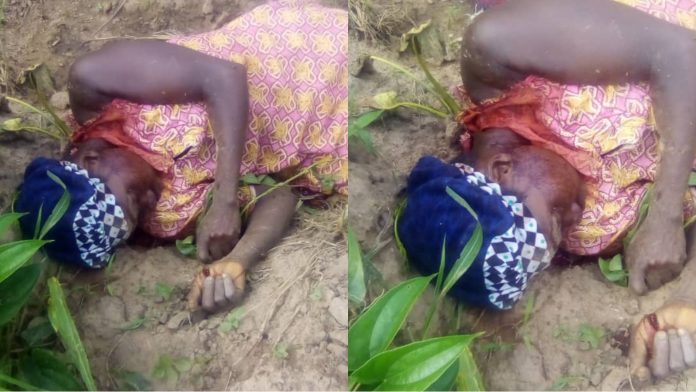 60-year-old Ayambile is in the grip of the police for butchering his 55-year-old wife at Nkwabeng Nanakumaa, a suburb of Nkoranza in the Bono East region.

According to the assemblyman of the area, Ransford Yeboah, a 14-year-old son of the couple, Peter Lamine, was on the farm with the parents when the incident happened.

He explains the wife had accused him of infidelity and impotence, making him inflict cutlass wounds on her neck after asking the son to excuse them from the portion of the farm they were working on Tuesday, June 14, 2022.

Whilst on the farm, the man told their child, ‘Kaakyire’ to go and work at the far end of the farm to allow the mother the concentration to work. As soon as the boy left, the father butchered his mother.

“When I was informed I went to the scene after inquiring from some assembly members of the area.

“The son said they were on the farm working. So his father told him to go to the other side of the farm and work so that his mother can concentrate on where she was working”

“Some few minutes later, the boy said he heard his father coming to his direction and speaking in their language that: ‘I am not going to die alone’. Then the boy saw that his father has inflicted cutlass wounds on the wife’s neck and was bleeding so he rushed to the community to inform people and when they got there, the woman was dead,” the assemblyman told the media.

He continued that: So I called the police patrol team to arrest the man and when we were on our way with the police, the culprit was saying his wife has been accusing him of cheating and also said the husband is impotent.”

B/R: 31-year-old farmer butchers wife, hands himself over to the police at Wenchi