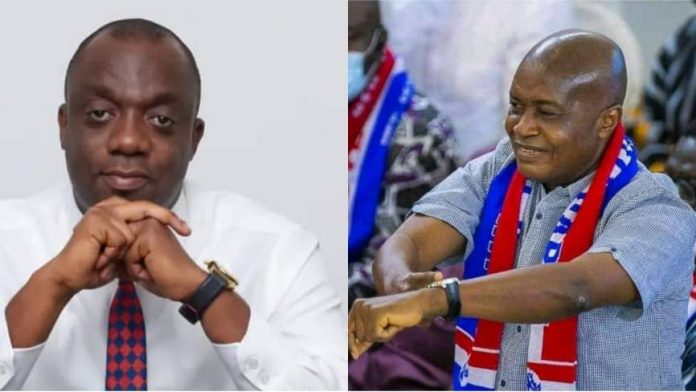 Incumbent John Boadu has lost his position as the General Secretary of the New Patriotic Party.

He has been ousted by 40-year-old Justin Frimpong Koduah, Chief Executive Officer of the Youth Employment Agency.

He becomes the second youngest person to be elected General Secretary of the party after Dan Kwaku Botwe, who was elected aged 39.

Prior to the polls Saturday, July 16, 2022, John Boadu was leading the contest per intelligence on the grounds. But some masters of the game believe the verdict was altered when a final crunch meeting was held at the church opposite the stadium before the conference began.

In a related development, Stephen Ayesu Ntim has also won the chairmanship position after his fifth attempt.

The first slogan of his campaign, ‘Time Aso’ meaning ‘it is time’ has been achieved with all eyes expecting the second part, which is ‘Break the 8’.

Information Minister, Kojo Oppong Nkrumah has in a tweet congratulated Mr. Frimpong-Kodua, Stephen Ntim and other leaders who have been elected.

Some images trending on social media suggests Mr. Boadu’s disappointed mood after the results trooped in.

Over 7,000 delegates from across the party’s branches across the world gathered at the venue to select from 47 candidates.

The party was bound to have a new National Chairman after almost seven years as Freddie Blay did not contest, having taken over from suspended Paul Awentami Afoko in 2015 in an acting role and given the mandate proper in 2018 in Koforidua.

Seven persons including the outgone National Treasurer, Kwabena Abankwa-Yeboah contested for the seat.

There were elections for First, Second and Third Vice Chairperson positions as well.

The General Secretary, John Boadu, went for re-election for the second time, having taken over as well in 2015 in an acting role from Kwabena Agyei Agyepong and given the mandate proper in 2018.

Other positions up for grabs were the National Organiser position won by Henry Nana Boakye, National Youth Organiser, Nasara Coordinator positions and National Women’s Organizer which Kate Gyamfua retained her seat with an overwhelming 93% endorsement.