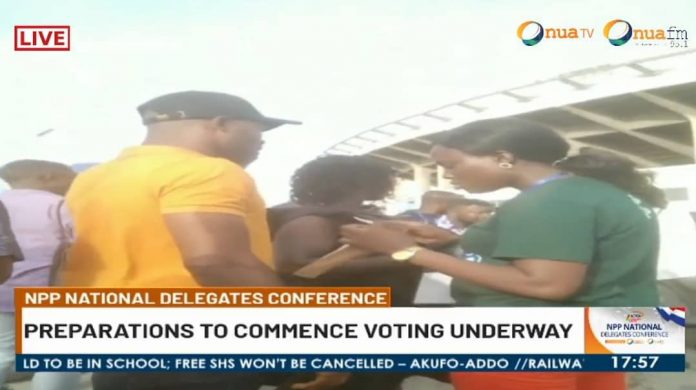 The National Delegates Conference of the New Patriotic Party has been characterised with money sharing as alleged by some people as the cause of the delay of polls.

National Chairman aspirant, Stephen Asamoah Boateng had said his opponents were inducing the delegates with money.

Onua News’ Yaa Titi Okrah also reported the aspirants were waiting for their opponents to pay first to determine whether they should top up or reduce their own.

Political Scientist and lecturer at the Kwame Nkrumah University of Science and Technology, Dr. Richard Baah Amoako had also indicated the delay was as a result of the votes being given to the highest bidder.

Meanwhile, Onua TV’s roving reporter, Ohim captured some scenes of delegates counting monies from envelopes they had received from aspirants.

A GH₵200.00 note counted by one delegate amounted to GH₵2,000.00 as contained in a particular brown envelope whilst others also held white envelopes.