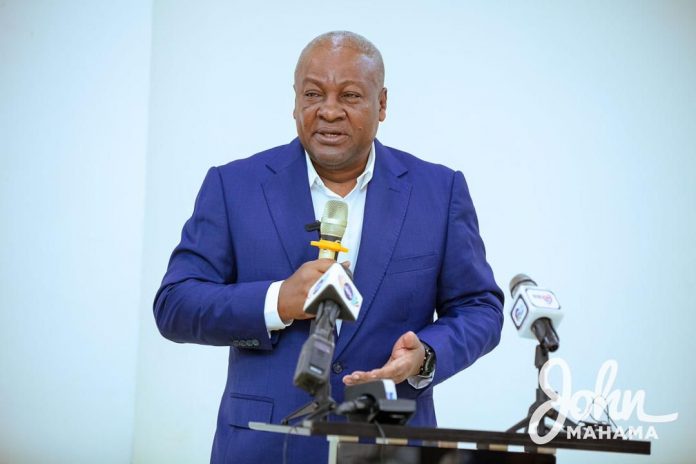 The Electoral Commission has encountered objections in its quest to update the existing voters register with the Ghana card as the sole proof of identification.

The Minority in Parliament last week raised some red flags on the proposal saying the EC’s approach is a means to disenfranchise many eligible Ghanaians from voting and vowed to resist the move.

2020 Presidential Candidate for the opposition National Democratic Congress (NDC), John Dramani Mahama has reiterated his stance on the development after his earlier objection to it.

He has supported the position of the Minority on the insistence to use other national identities to do the registration rather than just the Ghana card.

The argument raised by Mr. Mahama is that majority of Ghanaians do not possess the ECOWAS Identity Card aka the Ghana card and using it as the sole proof of identity is wrong call.

Speaking to end a three day retreat for Minority MPs in Ho Sunday July 17, 2022, Mr. Mahama asserted the Minority has become the only hope of the ordinary citizen in safeguarding Ghana’s democracy considering the rate at which government is manipulating state institutions in their favour, with the EC being an example.

The scrutiny that you are required to do on behalf of the people who elected you also extends to all state institutions. The framers of the 1992 constitution intended that a number of these institutions complement the efforts of the Legislature at ensuring good governance.

“The style of this administration has been to subjugate and dominate these institutions for parochial and partisan gain. These institutions have thus become pliant tools for the furtherance of the political ends of the New Patriotic Party (NPP) and President Akufo-Addo.

“One such institution is the Electoral Commission, which instead of making it easy for our citizens to take part in elections, rather takes delight in making it difficult. They appear determined to ensure the disenfranchisement of sections of our population at all costs through a misguided insistence on the use of the Ghana card as the only source of identification for a voter card.

“How do you do this, knowing that the Ghana Card is not available to everyone who should have one?

“The Ghana Card is a relatively new feature of our national life and has its merits in the scheme of things. At the moment, it is being brandished more as a political tool around which all manner of schemes is being fashioned towards elections,” he elaborated.

Mr. Mahama stated the National Identification Authority (NIA) cannot substantiate that majority of Ghanaians have the card and “until full and total coverage is achieved in the roll out of the Ghana Card, room must be made for those who are yet to be served, to exercise their democratic rights of voting. They cannot be excluded from the voter register due to no fault of theirs.”