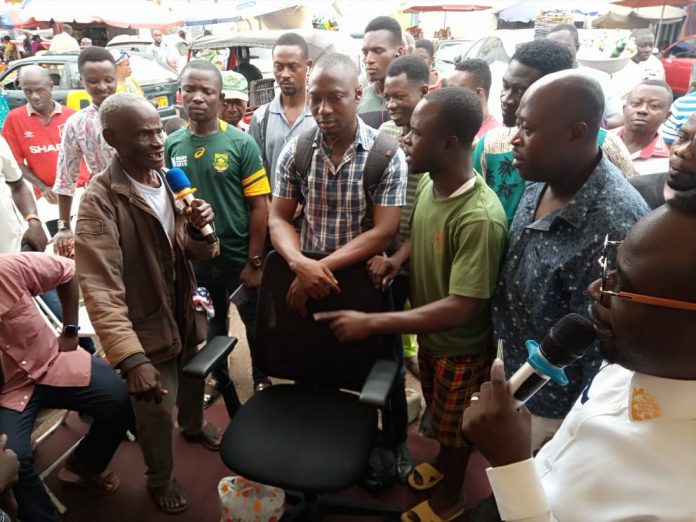 Akoma FM’s Public Forum on Friday, July 22, 2022, attracted hundreds of Kumasi inhabitants who trooped the grounds to witness and share their views on some pressing national and local issues.

The outdoor event was an outside broadcast version of Akoma FM’s current affairs and political show GhanAkoma. The main aim of the program was to draw radio closer to the people for comprehensive approach to discuss and find solutions to national issues.

Dubbed ‘Ghana’s IMF bailout; Kumasi’s perspective’, the public forum afforded traders and inhabitants within the Central Business District a platform to discuss, dissect and understand how Ghana has once again resorted to the IMF for a bailout and its effect on their businesses and livelihoods.

One is permitted to describe GhanAkoma’s IMF bailout Public Forum as a crowd puller and educative. Patrons who trooped to the forum in their numbers shared their ideas and took turns to ask questions baffling them. Identifiable groups such as Akoma FM Fan Club represented at the forum. Reps from the Kejetia Market Traders and other businesses also added colour to the program.

Another issue that took center stage at the public forum held at Adum was the complexities shrouding the Ghana card registration and replacement processes.

Just opposite the venue of the public forum was a serpentine queue at the forecourt of the Lands Commission building which is directly adjacent to Adum Post Office. The over 300 people who had stood in the long queues for hours walked into the tent and poured out their frustration.

Speaking at the GhanAkoma public forum, some of the registrants said had been to the office for at least six consecutive times. One man who described himself as Mohamed lamented that “I leave at Ejura, I have come all the way from Ejura to Kumasi just to replace my Ghana card. Now they have asked me to go to Accra for my issues to be rectified and I need the Ghana card to register my SIM card and the deadline is just ending of July.”

Mohamed’s issue is a representation of hundreds of people who looked frustrated as they wait in the queues for their turn to meet officials to attend to their issues.

One student who shared his experience said he had missed classes for the past six days so if he doesn’t get his Ghana card fixed to register his SIM card, he would be tempted to borrow money on the SIM and dispose it afterwards

After some of the frustrated registrants shared their ordeals on the public forum, one gentleman also came through and described himself as Nana Yaw, Regional Director of the National Identification Authority.

He explained that “we are supposed to register at most 75 people per day that’s how the machine is programmed but we in most cases register 150 and 130. Yesterday we registered 150. The day before we did 130. So we are doing our best. We don’t really like it when they spend long hours in queues,” he told host of the show, Aduanaba Kofi Asante Ennin.

The Regional Director further urged the general public to use the appropriate channels to seek redress for their issues.

The over one hundred and fifty patrons who had come in to share their views at the forum cheered at their favourite speakers when its their turn to take the microphone. The cheering mood charged the atmosphere which in effect made the forum entertaining and also educative.

Some patrons who spoke with the news team after the forum congratulated producers and organizers of the forum.

They shared their understanding of Ghana’s IMF bailout which until the forum were very skeptical and had little information on.

Next stop of the GhanAkoma Public Forum Train

Per popular request from listeners and other stakeholders, the hottest political, social and current affairs show will pitch camp at Suame Magazine as its next destination to interact with artisans, businesses and inhabitants within the enclave.

From Suame Magazine, your area may be the next stop of Akoma FM’s GhanAkoma Public Forum Train.