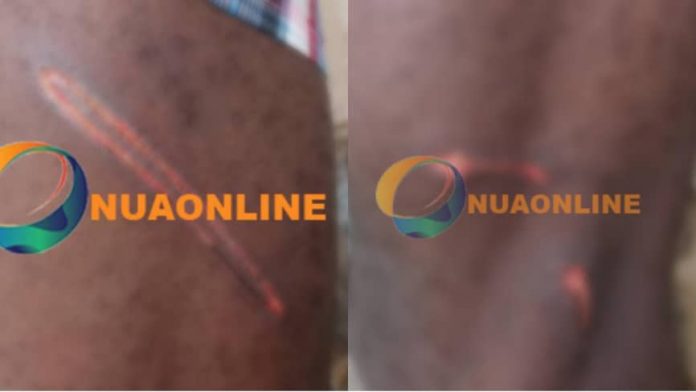 A 30-year-old man who was nearly set ablaze by a mob at Kasoa over an alleged theft has recounted the horrific moments he endured.

According to him, he came so closer to death as his attackers splashed petrol on him ready to set him ablaze but was only saved by the arrival of the police at the scene.

Onua News’ Nana Yaw Asare in an interview with the the victim, Michael Amannor, a resident of Amuzukorpe, a suburb of Kasoa says he is considering suicide which is the only option left for him after his attack.

Mr. Amannor, who was not at home at the time the mob arrived says he made an official report at the Kasoa Divisional Police Command but was only assured that nothing would happen to him.

He had only return to the house later only to be ambushed by the mob.

He was clubbed, whipped and stripped naked. Even though he pleaded for mercy, his assailants would not heed.

Michael had petrol splashed on his naked body and just as he was about being lighted up, a team of police officers arrived at the scene owing to a distress call placed by another resident of the area.

Even though the intervention of the police saved Michael, he appears to be extremely terrified and as he recounts the horrific incident, he mentioned suicide as one of the options running through his mind.

According to him, he has no knowledge of what he’s being accused of and cannot understand why he could be humiliated and brutally abused by his own neighbours based on speculations despite him having no record of thievery.

He is even more disturbed that the police failed to handle the situation in a manner that would have prevented his ordeal even though he had officially notified them.

There’s been no police action following the incident and as he groan in pain, Michael is yearning to see his perpetrators brought to face justice.

“They flogged me with wood and copper wire. They said I have stolen a TV and other items in a robbery incident. Yet I have no idea of it. They poured petrol on me and in my eyes,” he narrated.

He also appealed to the IGP seeking for justice saying the police should bring the perpetrators to book for him to redeem his image.

“I believe many innocent people have gone through my ordeal and some are even in prison. The authorities should ensure that the laws work. I’m pleading with the IGP to intervene to ensure that the perpetrators are brought to book.”