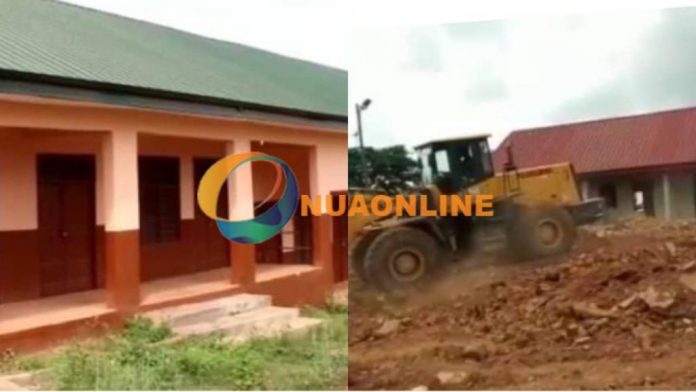 The Kwahu Daa Basic School in the Kwahu West Municipality of the Eastern Region has been closed down and dilapidated structure razed down.

The School Management Committee (SMC) took the decision to avoid putting the lives of pupils and teachers in danger.

Meanwhile a new GETFUND project for the school is underlock by the contractor.

The SMC demand that the new GETFUND project be opened before pupils would be allowed to return to school.

“We have made appeals to the MCE and the MP. It’s over three months. I am leading my people to raze down the school,” chief of the area, Nana Amakye Appah explained.

A pupil who had once sustained some injuries on the head from portions of the old structure shared his ordeal.

“I was on my way to join the queue for the school feeding when a door fell off and hit my head, I plead with the authorities to open the new facilityfor us”

The SMC Chairman, Yaw Appiah, wants the MCE for the area, Yaw Owusu Addo, to intervene.

“I prompted the contractor to ensure he delivers on all details in the contract, but he won’t budge. We urgently need the facility”

Some parents shared their frustration.

“We can’t teach the pupils home. The facility must be opened.

“The old structure was weak. We contributed at PTA to buy roofing sheets any time it rained. The kids cannot continue to stay there.

“It was a life threatening school building. We can’t use it again. The new GETFUND facility must be opened for our children,” the parents shared.

The SMC Chairman, Yaw Appah, explained efforts to get the contractor to change doors of the GETFUND project as detailed in the contract proofed futile until he took a defence that government was yet to pay him.

“We asked him to change the wooden door to metal as stated in the contract. He won’t budge. Finally he told us that the government hasn’t paid him so he won’t open the school for us to use.

E/R: Chief leads subjects to reject what they call illegal mining proposed by their MP