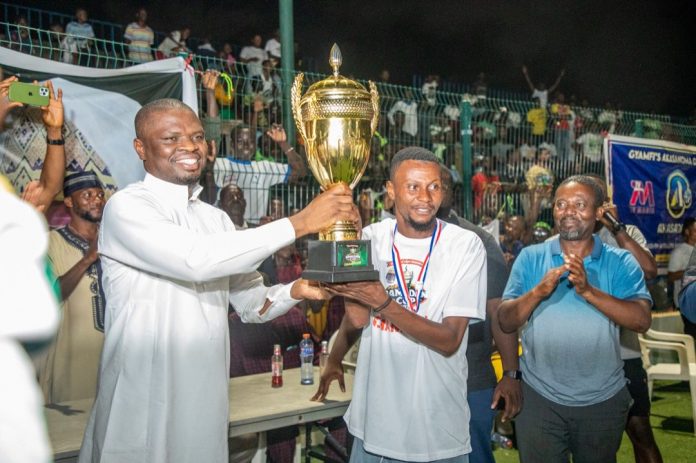 The newly-constructed Sharubutu Sports Complex in Fadama, Accra, was packed to capacity as defending champions Kasoa retained the Sheikh Sharubutu Ramadan Cup over the weekend.

The defending champions defeated Kaneshie Night Market, a suburb of New Fadama located between North Kaneshie and Fadama, on penalties after drawing in normal time.

The Night Market community earned a late entry to participate in the 28-community tournament after Yendi could not show up early on Saturday, and they nearly caused an upset but eventually lost on penalties with thousands of their ‘home’ fans cheering them on.

It was a fitting climax to two days of soccer festival at the venue, featuring 28 Zongo communities across the country.

Kasoa, who won the 6th edition of the competition last year, gave a strong indication of their preparedness to retain their trophy with an impressive 2-0 victory against Tema Zongo in their opening match.

After that, they went on to defeat Nungua Zongo in the second round, Ofie Akuapem Zongo in the quarter finals, Cowlane in the semi-finals before pipping Kaneshie Night Market to the trophy on penalties.

Debutants and late entrants Night Market stunned fans on their way to the finals, including victories against favourites Nima and Shukura.

The tournament, in its 7th edition, has become the fans’ favourite due to its competitiveness, and it was no surprise that they stayed on until midnight to see the crowning moment, just as the 2021 edition.

By their victory, Kasoa joins Ashaiman as the only side to have won the competition twice, and twice in a row.

The tournament is held at the end of Ramadan every year, to bring Zongo communities together, create opportunities for young footballers in Zongo communities and also played in honour of the National Chief Imam.