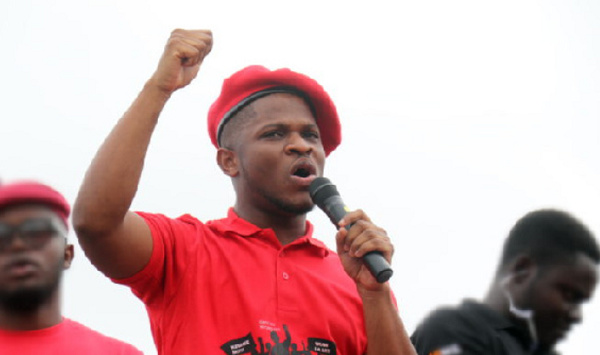 Sammy Gyamfi, a leader of the Arise Ghana pressure group has alleged persons who pelted security officials with stones at day one of their protest were planted by the police.

He referred to such individuals as “agent provocateurs.”

“They are agent provocateurs planted in their midst by the Police, these are not members of the Arise Ghana. We arrested them and gave them to the Police,” he alleged at a presser after the protest on Tuesday.

Mr. Gyamfi continued the protestors had no intention of destabilising the peace of the country as being peddled by the police.

“Our hands are clean, our conscience are clean, we believe in what we are doing,” he cried.

He noted comments by the police are PR gimmicks to brand the protestors as violent as they announced 12 officers have been injured by members of the Arise Ghana group.

The injured officers according to the police have been transferred to the Police hospital in Accra for further treatment.

“Some Police vehicles have also been damaged,” the Police said in a statement.

The Police further described the development as shameful.

“What a shame, we were there to protect you and ensure your safety, but you throw stones at us, injure and hurt us. This behaviour is unacceptable and must be condemned.”

But Sammy Gyamfi who is also the National Communications Officer for the National Democratic Congress (NDC) said ” If you look at the statement being issued by the Police on their social media handles, you can clearly see through the PR gimmicks being mounted by the Police.