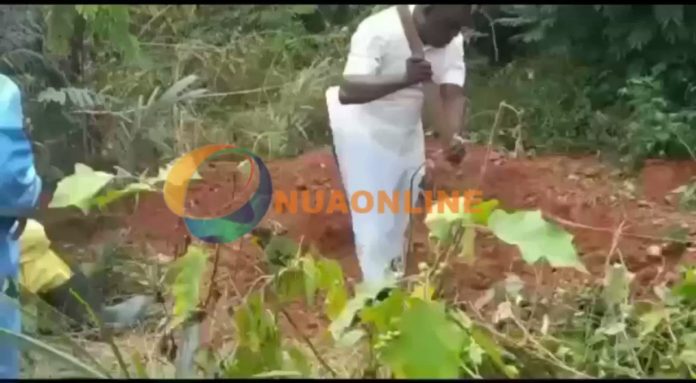 The Kwahu West Environmental Health Directorate have exhumed the corpse of a woman they buried among a mass burial exercise at the Nkawkaw-Trafford cemetery in the Kwahu West Municipality of the Eastern Region.

The Nkawkaw magistrate court ordered for the exhumation of the corpse on request by the family.

The case is yet to be done with.

The body of the late Afua Attaa was kept at the Nkawkaw Holy Family hospital after she was pronounced dead.

Efforts by the family to get postmortem on the body got dramatic after hospital officials could not find the body.

Her corpse was part of a burial mass which took place in January 2022.

Already, issues around the cause of her death still lingers unresolved. A case a section of her family hopes to get answers before this incident.

Some family members were worried their relative’s corpse went missing.

“We don’t understand what happened, it is the court which ordered that my sister’s corpse be exhumed for us. It has been done. We wait for the next action from the court on what next to do after the postmortem. But I am really not happy about the hospital official who came here. He has ordered us to take the corpse away right after the postmortem. That is very unfair to us,” a family member expressed.

The Kwahu West Municipal Environmental Health Director, Joseph Krampah, explained the exercise was carried out in January this year due to the deteriorated condition of the bodies and the environmental challenge it posed.

“We were called to check the deteriorating nature of the bodies at the morgue and take action, we had the mass burial for 10 adults and some babies,” he clarified.

Management of the Holy Family hospital at Nkawkaw says the case is still in court, hence official statement cannot be made now.