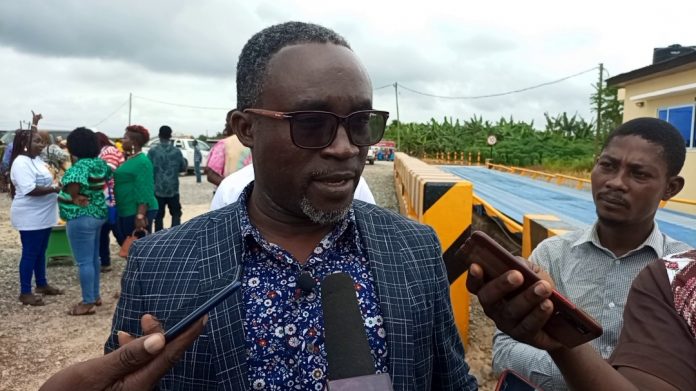 The Municipal Chief Executive for Tarkwa-Nsuaem, Benjamin Kessie, has warned the National Sports Authority (NSA) to stay away from the redeveloped Tarkwa and Aboso Park.

The MCE says the NSA should focus on maintaining the already existing stadiums in their care, vowing the Assembly will never give out the newly built 10,400-seater capacity stadium to the NSA to manage.

This caution from the Tarkwa-Nsuaem Municipal Chief Executive comes on the back of the NSA’s visit to the redeveloped Tarkwa and Aboso Park which is near completion.

“Let me put it on record and say without any shred of doubt that the Tarkwa and Abosso Park now soon to be stadium will be managed by the assembly. Football fans and residents of Tarkwa should rest assured that when the park is completed, Goldfields will hand it over to the assembly.”

“The management of the park, the facility is in the hands of the assembly. When we completed the T and A, we handed over to them [NSA]. Go and check how they managed it. We have people who can manage the facility. There is Essipong stadium, they should go and manage that,” he told Tarkwa-based Medeama FM Thursday, July 28, 2022.

He added that the assembly will entrust the management of the facility to a private firm that will ensure the maintenance of the stadium and make profits for the people of Tarkwa.

“It’s not by force. We’ll not allow the NSA to take over. The sustainability of the pitch and the facility will be in the hands of the assembly. We are holding it in trust of the people.

“I believe there are people here who are capable of managing the facility. We’ll give it to private people to manage and make profits. We’ll not give it to someone who gets paid at the end of the month. The NSA should stay clear.”

Meanwhile, some residents in the Municipality say they are in support of their MCE.

“In this country we are too comic. The National Sports Authority they manage all the stadia in this country. The question is, they give them out for events and when it comes to the maintenance, it becomes a problem. There is no accountability so I support what the MCE said. We should give it to the Assembly and they should make a bye law that will force them to make a regular maintenance,” some residents noted.

“In the previous park when Goldfields built the dressing room for the park it was handed to NSA how did they manage the place? Even the washrooms were nothing to write home about so they should give us a break,” some residents added.