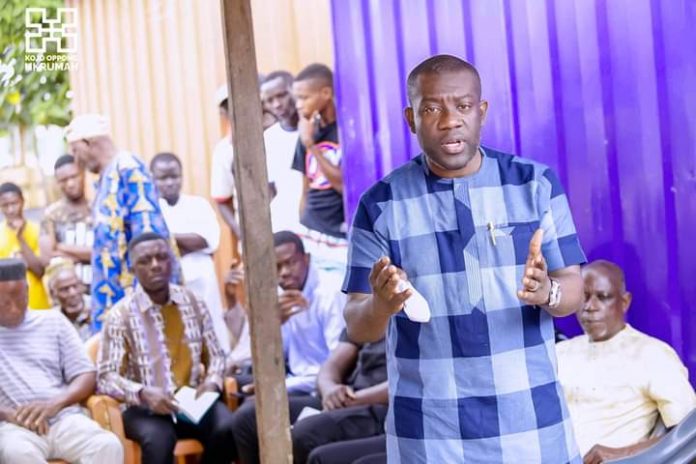 Following the violent clashes between Ofoase Zongo and Brenase youth in the Ofoase-Ayirebi constituency last Thursday, Member of Parliament (MP) for the area, Kojo Oppong Nkrumah has visited both sides of the impasse to calm tensions and called for peace.

In an engagement with townsfolk and traditional leaders on both sides, Mr. Oppong Nkrumah expressed regret about the happening which has left one person dead and four others sustaining varied degrees of injury.

“First of all, we are one people. Whether you are from Brenase or from Ofoase, we are one people living in harmony. That is why we shouldn’t allow things like this to divide us. Ofoasi-Ayirebi is noted for being one of the peaceful areas in the region.

“Over the years, we have experienced significant developments which has made our constituency the envy of many. So we need to come together as one people and not engage in acts that further divide us,” the MP said.

He called on both factions to exercise restraint and maintain law and order in the area whiles the Police expedite investigations into the matter.

The meeting comes on the back of clashes between youth of the two towns. Residents of the towns have previously lived in unity until recently when reports of attacks on each other emerged. Though the Police have restored law and order, tensions remain high with fears of reprisal attacks being planned.

Mr. Nkrumah has therefore asked the Police and the District security Council to step up patrols and intelligence led operations to forestall further violence.

Traditional leaders and youth of both towns thanked the MP for his visit and committed to live in peace while asking for justice to be done by the state.

E/R: One shot dead, 4 others in critical condition after two youth group crash at Ofoase

[email protected]: Spirit of sacrifice, patriotism will carry us beyond 29 – Oppong Nkrumah