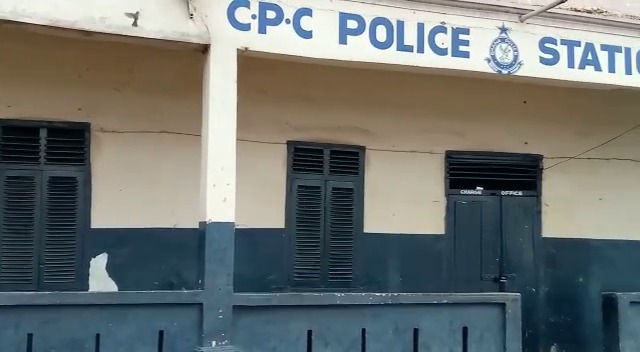 Access to the police services at CPC Police station within Krofrom, a suburb of Kumasi, has been blocked Monday August 1, due to alleged non-payment of rent arrears.

The locked up police station has suspended access to general police services such as the charge office, criminal records, issuance of police clearance certificates among others.

Information reaching Onuaonline via AkomaFM indicate several people who trooped to the police station for varied services were greeted with the disappointment of their lives Monday morning.

The said home according to Assembly member for CPC Electoral Area, Kwaku Appiah is that “the police station has been operational for over thirty years and it has been housed in the said home at CPC by the same landlord so the police administration was served notice of eviction some three years ago and little did we know that the deadline of the eviction was ending of July 2022,” he said on Akoma FM’s current affairs and political show, GhanAkoma on Monday, August 1, 2022.

Although the police administration is yet to respond to the CPC station rent issues, scores of some residents in the area have expressed mixed feelings on the issues.

Even though the decommissioning of police station in such a crime-prone area will spark serious security concerns, a section of the residents hold the station was just a white elephant due to the crime rate which was on the ascendency.

Section of CPC residents jubilate over locked up police station

Some residents, have, however, jubilated over the locked up police station.

Information reaching Onuaonline reveal some residents who heard the police station has been locked up Jubilated for reasons best known to them.

The assertion, is due to the high crime rate of the area which the residents allege was the modus operandi of such crimes, hence their jubilation.

Appeal for new police station to curb crime at CPC

The Assembly member for CPC, Kwaku Appiah, further appealed for swift intervention of authorities to establish an office station at CPC to help fight crime in the area.

Already, the Krofrom area is flagged as a hotspot for crime, making the absence of police station an icing on the cake for crime perpetrators.

The official police station being built for Krofrom and its environs is situated in the new market that has been abandoned for the past 15 years.

Residents have been living in fear as they complain of continuous invasion of thieves and criminals at the abandoned Krofrom market.

Abandoned and dejected for over 15years, the Krofrom market was supposed to serve as a peripheral facility to reduce congestion at the Central Business District.

The abandoned market has now become a safe haven for criminals and a brothel for prostitutes, leaving residents in constant fear.

Sitting on over a six-acre land, the Krofrom market, if completed, will have over 2,304 single stalls, three shopping blocks, which will house banks, fire stations, retail outlets, leisure centres, warehouses, offices, clinics as well as police stations.