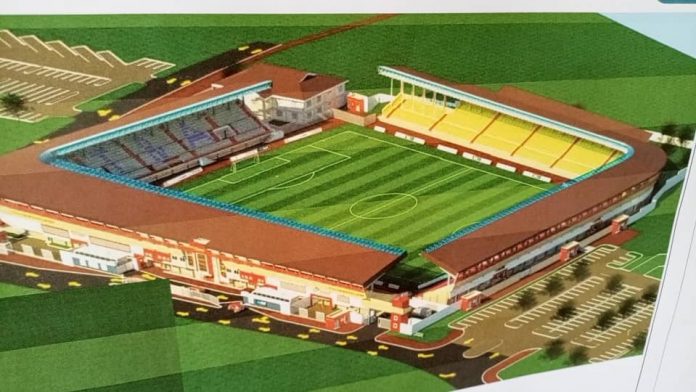 Mr. Amervor was speaking at a press engagement at Tarkwa when some staff of Gold Fields and some journalists on Thursday July 14, 2022, visited the project site.

According to the Project Manager, they have to import labourforce (Artisans) from Accra and Takoradi to assist in the daily operations which is hampering the progress of the work.

The Tarkwa Na Abosso (T&A) Park was the only facility capable of hosting national and international football matches in the Tarkwa-Nsuaem municipality. The condition of the pitch was poor and matches had to be stopped whenever it rained.

The park also lacked several amenities, including spectator seating, emergency facilities and public lavatories. Due to the importance of the park to the community and the growing demand for its use by football clubs, Gold Fields in consultation with traditional leaders and the local government, agreed to reconstruct the park into an international standard stadium.

In 2018, a sod was cut for the construction of Ten Thousand Four, Hundred (10,400) seated capacity stadium at Tarkwa by Gold fields Ghana Foundation, Tarkwa Mine, from its initial capacity of Four Hundred (400) seated.

The project is legacy project from Gold Fields Ghana Foundation in remembrance of the company’s twenty five years of operations in Tarkwa.

The sixteen point two million dollars ($16.2m) project is fully funded by Gold’s Fields Ghana Foundation, Tarkwa Mine. The project is scheduled to be completed in fours year time after the sod was cut.

Although the contractors are working hard to meet the deadline by ending of December this year, the project Manager for Micheltti, Adolf Amervor, says his major challenge is getting artisans from Tarkwa.

“As part of our contract is mandatory for us to get the local guys involved. We are not to engage our people from Accra and other towns or anybody from afar. We need to engage the local guys. As we said the galamsey the guys think is the quick means to get money. So it is becoming a problem for us getting good artisans in this community. If we have majority of them I don’t think we will be importing people from Accra”

Meanwhile the manager in charge of projects at Gold Fields Ghana, Tarkwa Mine, Rogger Adama, is optimistic they will complete the work by December this year. Although the work done so far is seventy three percent (73%).

“At a point we actually were behind schedule but as best as we could do in any project we have to find way to catch-up, some of the things we have done is to make sure that we do them in the effective way to come back on track.
So we are keen and very sure that by December, this project will be done as we promised,” he assured.