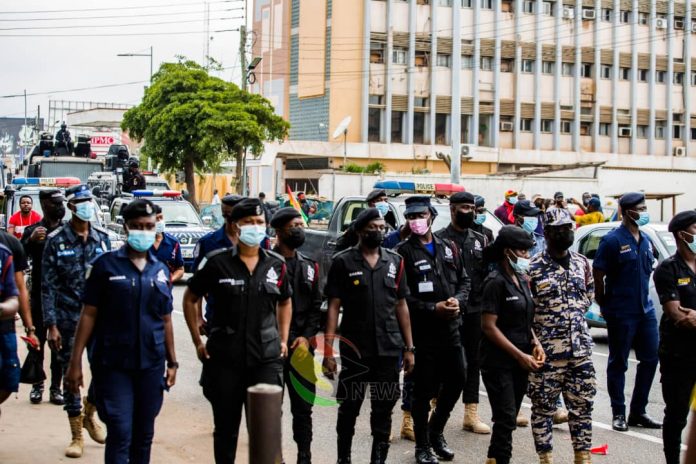 The Police Administration has promoted two officers, Inspector Justice Azumah Komla and No. 52543 G/L/CpL Felix Diameh for their role in effecting the arrest of No. 45638 G/Sgt Lotsu Agbeko, a Police officer stationed at the Formed Police Unit (FPU) in Accra.

This was contained in a press release issued by the Police on Tuesday June 14.

News Release:
Police Promote Two Officers for Arresting One of Their Own Who was in Possession of Substances Suspected to Be Indian Hemp

Read more from the attached; pic.twitter.com/B8FbjnkyKu

A police officer with the Formed Police Unit in Tesano-Accra is currently under strict guard at the Peki Government Hospital, where he was rushed to following a crash on the Kpeve mountains in the Volta Region.

Identified as G/Sergeant Lotsu Agbeko, 36, the police officer was said to be travelling to the Volta Region in his personal Toyota Corolla but failed to heed to a signal to stop when he got to the Have police barrier.

His failure to heed to the signal resulted in a hot chase by the personnel manning the barrier.

Unfortunately for him, he was involved in an accident in the process and had a fracture on his left hand. He was then rushed to the near-by health facility.

It was after inspection of his vehicle that 84 parcels of substances suspected to be Indian hemp were found compressed in the boot.

He is said to be responding to treatment.

In a situational report on Tuesday, June 14, the police in Kpeve says the suspect has been under guard since the incident on Saturday, June 11 around 12:30pm.

The substances have been retrieved.