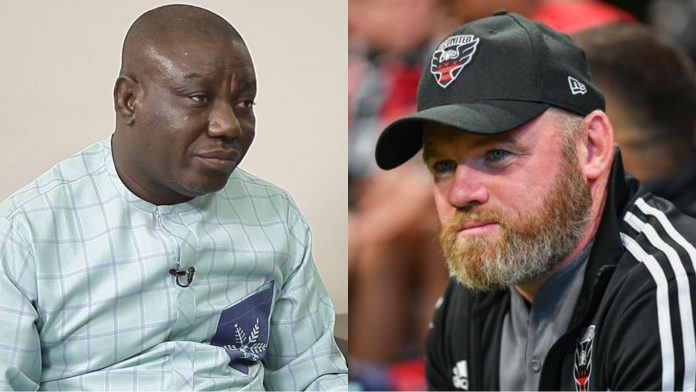 He says the defender has played well at this year’s World Cup as he has always done for England, making him a favourite for Gareth Southgate.

The statement the legislator made went viral which was spotted by the former England International.

He described the Veep as an economic Maguire.

The MP whilst speaking in Parliament said “Harry Maguire, he’s a defender. He was tackling everybody and throwing his body everywhere.”

“Mr. Speaker, you remember in this country we also have an economic Maguire. We’re clapping saying this man is the best in managing foreign terms. Mr. Speaker why we gave this Maguire the opportunity to be at the centre of our defence? He became the rest of our own goals. Our economic Maguire is taking control of the fundamentals of our economy and destroying all of them,” Mr. Adongo said in Parliament.

But Rooney, responding to the MP’s joke, said Maguire has been at his best at the World Cup in Qatar.

“On social media this week I saw someone in the Ghanaian Parliament making fun of Harry Maguire. It was crazy, because Harry has been outstanding at this World Cup. I predicted he would do well – because he always does well for England and never lets Gareth Southgate down. He’s simply a very good defender with a strong mentality,” he told The Times.

Bawumia calls for Adu Boahen to be investigated

‘Mahama warned you of these Akyem Mafias’ – Captain Smart to Bawumia

‘Your victory is a forgone conclusion’ – Bolewura to Bawumia