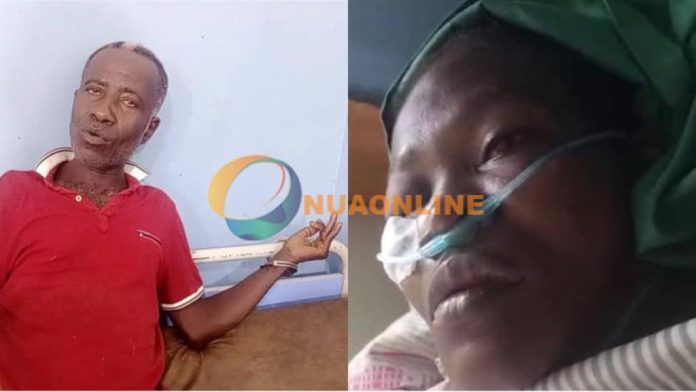 The Police at Asankragwa in the Wassa Amenfi West Municipality of the Western Region has arrested 51 year Francis Duku for attempting to kill his wife, Aba Yaaba, whom he has been married for 13 years.

Neighbours who heard the screams of the wife and children rushed and accosted Mr. Duku who had stabbed himself in the stomach in an apparent attempt to also take his life.

Francis Duku reportedly attempted to take the life of his wife and his own at about 3:00am Thursday dawn, July 21, 2022 while the two were sleeping.

Aba Yaaba sustained machete wounds on her neck, head and back while the husband sustained self-inflicted wounds in the stomach.

Speaking on her sick bed at the Asankragwa Catholic Hospital, she said her husband has been acting strangely in recent times saying “most of the times you see him speaking to himself”.

“We have been married for the past 13 years and have 4 children together. To the best of my knowledge, I have not wronged him in anyway. We have been living peacefully together all these years. This is the first time he is showing this violent behaviour. In fact, the night before he attempted to take my life, he came to sit by me at where I sell my groundnuts and we had a good laugh together”.

According to Aba Yaaba, the event has left the children in a state of utter shock.

She narrates: “In the evening while we were preparing to sleep, he asked that I go sleep on the floor. With some hesitation, I did because sleeping on the floor meant sleeping with the children. He left the room and I slept. I woke up with a start to see my husband kneeling close to where I was sleeping with a machete. Before I could say anything, he started cutting me. Amidst screams, I started to struggle with him. Miraculously, I was able to escape from his grips and I came outside…”

Speaking to journalists at the same hospital, the husband, Francis Duku, claimed he decided to end his life and that of her wife following incessant accusations from his extended family that he has neglected them and spending all her financial resources on the wife.

“The accusations kept coming each day. Later it turned into death threats. No matter how hard I explained they will not listen and that was having a heavy toll on me. So, I decided to end everything by killing us both,” he explained.

He maintained that “I have no problem with my wife, we have been living peacefully together.”