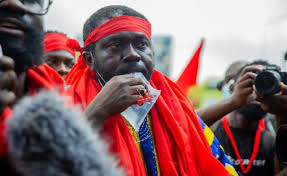 Information available to Onuaonline.com indicate the principal convenor of FixTheCountry movement, Oliver Barker-Vormawor is going to be suspended from the group.

Our sources say the suspension is going to be forever.

It adds that leadership of FixTheCountry have confirmed Barker-Vormawor is behind the purported letter indicating the movement will embark on its June 4 demonstration with arms.

The letter, currently at the police headquarters, even though without signatory, has been responded to by the police service.

The response from the police cites Barker-Vormawor, broadcast journalists Blessed Godsbrain Smart and Okatakyie Afrifa-Mensah with one Benjamin Darko as organisers of the purported ‘armed’ demo.

The letter for his suspension will be released by close of day today, Thursday, June 2, 2022.