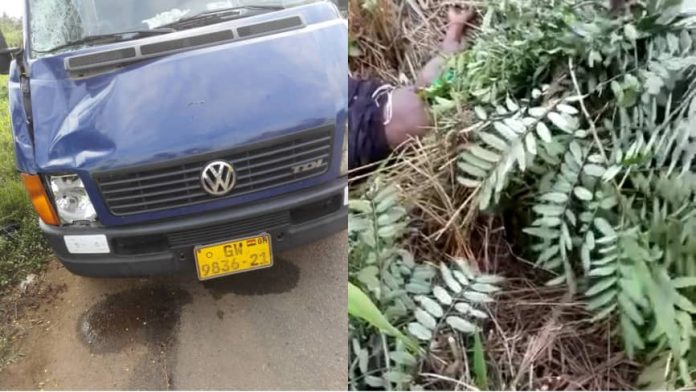 A young footballer believed to be in his early 20s has met his untimely death at Gomoa Anteadze on the Apam-Mankessim Highway, after a Sprinter Benz bus with registration number GW 9836-21 knocked him down.

According to information gathered, the deceased was crossing the road to pick a ball that had crossed the highway in a friendly football match that was taking place.

Assembly Member for the Gomoa Manso/Anteadze Electoral Area, Essien Brown who confirmed this to Onua News’ Nana Yaw Asare explained how the accident occurred indicating the deceased is from Gomoa Ngleshie and had come to the area to play football.

The Assembly Member has, however, advised young men who are into football to be circumspect when playing on pitches closer to highways to avert such ugly incidents.

He indicated such an occurrence has never happened in the area before and that the new development is a worry to the people in the area especially footballers who normally play on the field.

“The youth must be careful because there is no way they can stop playing football. We will join the chief and the elders in this community to speak with them to prevent this from reoccurring.”

6 dead, others injured in an accident at Aprede

A/R: Head of a private car driver chopped off after tanker driver crashes his vehicle