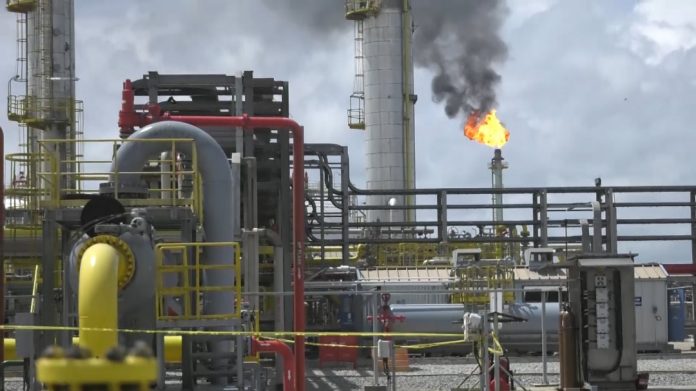 Residents of Asem Nda in the Ellembelle District of the Western Region are accusing the Ghana National Gas Company of destroying their livelihoods without commensurate compensation.

The residents single out the gas flaring activities of the company and are demanding immediate remedies against unforeseen health complications to them.

A tribute of the Amanzule River separates the Ghana National Gas Company’s processing plant from the Asem Nda community in the Ellembelle District of the Western Region.

The Asem Nda community has a population of close to one thousand (1000), most of whom are peasant farmers.

From the Amanzule tributary, the community produces arguably the tastiest tilapia, in the entire Nzemaland which attracts traders from all over the region.

Not only that, the large expanse of farmland, metres away from the community was used to cultivate groundnuts. Stories are told of how trucks would line up the streets of Asem Nda to cart groundnuts to the various markets.

The streets are largely empty and for the majority of residents, they have moved to other communities to work. What keeps the community lively now is perhaps the evening football gala.

Residents blame this sour state of affairs on the emergence of the gas processing facility. The Ghana National Gas Company has a long chimney close to the community that flares excess gas.

According to residents, since the chimney started operations, life at Asem Nda has been snuffed out.

“The heat here in the night is unbearable. We use to catch a lot of fish from our river where many people will come here to buy but ever since the installation, we don’t get fish to catch. What we have also realised is that there has been a change in our farming activities as crops don’t do well,” a resident claimed.

Even though the residents cannot scientifically prove their claims, they insist the changes in the community only started after Ghana Gas started operations.

“This place is best known for growing groundnut. But groundnut don’t do well here anymore. Again, when you collect rain water and it settles, you see some black substance beneath the water. We suspect it is from the smoke associated with the gas flaring,” another resident lamented.

Patrick Ekye Kwesie leads the Western Nzema Youth League. The group has for the past three years been engaging stakeholders in an effort to address identified development challenges in the area.

He accuses Ghana Gas of operating outside permissible levels and also accuses the Environmental agency of failing to ensure regular checks.

“The Asem Nda community has not been the same since Ghana Gas started operations. The complaints of acid rain and other changes are real. Ask people about Asem Nda groundnut and tilapia. These things are no more. And we are of the strongest conviction that it is because of the operations of the company. What the company is doing is not gas flaring, they are venting the gas. And this is very harmful considering the substances that are thrown into the air. There is nowhere in the world that you will find this kind of installation close to a community”.

He continued: “Recently, we heard Ghana Gas has won an environmental award and we are surprised. The organisers should have come to the community to find out things for themselves. What we need is the installation of air quality monitor devices to assess the situation in real time. We hear some report is sent to EPA. We demand to know the contents to assure us that the changes have nothing with Ghana Gas.”

But Western Region Director of the Environmental Protection Agency, (EPA) George Diawoo explains his outfit gets regular update from Ghana Gas about their emissions which indicates Ghana Gas is operating within permissible levels.

“What happens is that every month Ghana Gas reports to our new office in Ellembelle and the office transmits same to us in the region. We review it. Our petroleum unit in Accra also reviews it. And from time to time, we pay unannounced visits to verify the numbers. So, from where I sit, Ghana Gas is not violating any environmental protocol”

He added: “The long chimney has what we call the flare stack. This is able to break the residual gas into carbon dioxide and water vapour. And this is acceptable everywhere because it is an international best practice. The flare stack is indeed a better way of managing the residual gas, so there is no cause for alarm”.

When asked about the claims of acid rain and polluted water, Mr. Diawoo said “this is the first time I am hearing about this. The good news is that now we have an office in the Ellembelle District, so I will let the officers go there and investigate. I am sure that in about three week’s time when you come back, I will be able to speak to the claims based on the results of our investigations”.