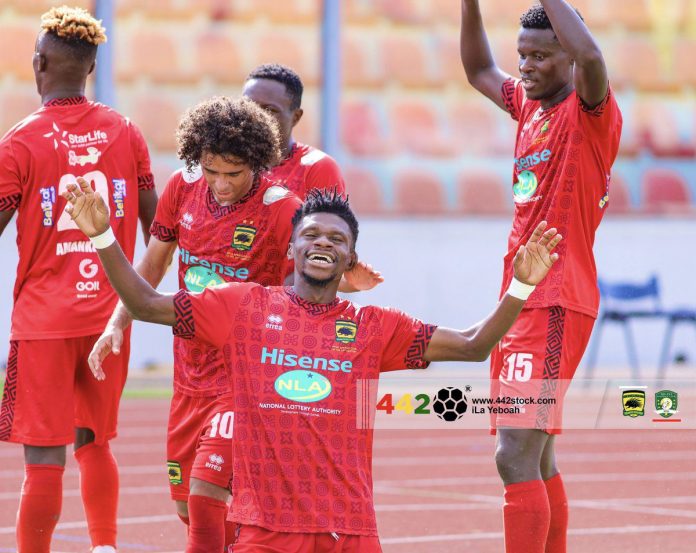 Asante Kotoko were held to a 1-1 draw by Aduana Stars on Sunday, with Franck Mbella Etouga scoring but failing to convert two penalties.

The Cameroonian put Kotoko ahead with a spectacular goal, but he missed two penalties in the second half. This is especially surprising given that he has been the most clinical finisher this season, with 19 strikes and atop the scoring chart.

Aduana scored a late equalizer through Bright Adjei to leave Kotoko with only a point.

Despite the draw, Kotoko are nine points ahead of Bechem United, who drew with Hearts of Oak in Bechem on Saturday. The Porcupine Warriors also have a 12-point lead over sworn rivals Hearts of Oak with six games to go.

With a hard-fought win over Karela United at home, Eleven Wonders climbed out of the relegation zone. King Faisal have taken the place of Wonders after their defeat at Bibiani Gold Stars.

Medeama won 2-0 against AshantiGold, Dreams and Real Tamale United shared the spoils in Dawu, as did Elmina Sharks and WAFA, both of whom appear destined for relegation, and Great Olympics won against Berekum Chelsea.