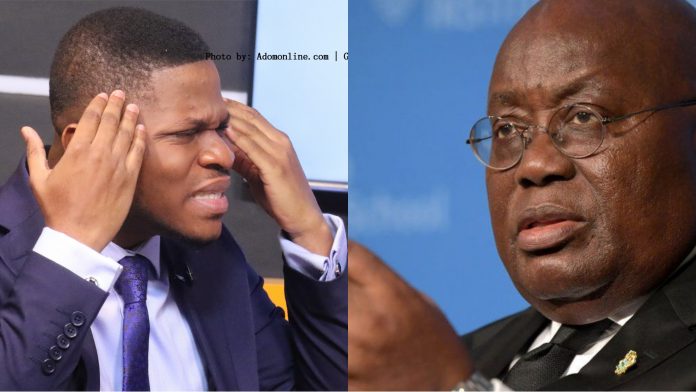 The opposition National Democratic Congress has shot a salvoe on the government and the ruling New Patriotic Party for the latter’s attempt to blame the frustrations expressed by a section of the citizenry to the president on the umbrella family.

According to the NDC, the booing and hooting at President Akufo-Addo during his keynote address at the Global Citizen musical concert was a reflection of the hardships the government has subjected the masses into.

After the president encountered the embarrassment at the global stage, a deputy director of Communications for the NPP, Ernest Owusu Bempah opined in a release that the incident was an orchestration by the NDC.

But according to a statement signed by the National Communications Officer of the NDC, Sammy Gyamfi, the government’s “attempt to belittle the spontaneous angry protest of such a vastly heterogeneous crowd is to turn a deaf ear on the felt needs of the Ghanaian people.”

READ ALSO: The booing at Akufo-Addo off a global stage is just a tip of the iceberg – NPP told

It says the government needs to come to terms with the reality and accept the fate that the people have exhibited a vote of no confidence in it for the plundering the president to such international ridicule.

Read below the full statement from the NDC

BOOING OF PRESIDENT AKUFO-ADDO AT GLOBAL CITIZENS CONCERT WAS A REFLECTION OF THE MOOD OF GHANAIAN YOUTH.

We at the National Democratic Congress (NDC) have followed with interest, discussions around the fallouts from the Global Citizens musical concert held last weekend at the Black Stars Square in Accra.

Of particular notice was the reported booing of President Akufo-Addo by the crowd that had gathered from all walks of life on that fateful day. Indeed, both the traditional and social media space has been awash with videos of the said incident in which the charged-up crowd, predominantly made up of young people, are seen hooting at the President who had made an appearance to deliver a keynote address.

Ironically, while President Akufo-Addo appeared excited and was heard proclaiming: “Ëwiase nyinaa aba Ghana”, to wit, the whole world was in Ghana, the youth would have none of that, as their joy and the electric atmosphere suddenly dissipated into an expression of anger and disapproval at the sight of their President.

The events of that day were unprecedented, as no sitting Ghanaian President, at least under the Fourth Republic, has ever been subjected to such ridicule and embarrassment.

Ordinarily, it is the business of the Akufo-Addo/Bawumia government and their handlers who by now should have come to terms with the reality of the difficult times Ghanaians are living in and that the action of the youth reflects an overwhelming vote of no confidence in their crass misgovernance and mishandling of the affairs of our dear nation.

Sadly but unsurprisingly, we have become aware of some irresponsible and ludicrous attempts by NPP hirelings and lickspittles to blame the booing of President Akufo-Addo at the said event on the NDC. This latest attempt by the NPP to blame the NDC for the monumental embarrassment that befell President Akufo-Addo at the Global Citizen musical concert is not only insulting to the sensibilities of Ghanaians but also underscores the fact that this government and their hired apologists are simply oblivious of our present reality or perhaps they are underestimating the anger of the Ghanaian people.

A hungry man, is an angry man, it is often said, but this plain truth is lost on the Akufo-Addo/Bawumia government. The frustrations expressed by the youth on that fateful day perfectly reflects the excruciating and frustrating times Ghanaians presently find themselves.

It bears reminding the ruling New Patriotic Party that the struggles of the youth are a microcosm of the daily ordeal of the Ghanaian people who must find ways to survive at a time inflation is 33.9%, with prices of goods and services skyrocketing every day. The youth expressed in the clearest terms, the daily struggles of the vast majority of our people who wake up every passing day with no hope of where their next meal is going to come from. Those young people simply gave voice to our daily struggles with unbearable prices of fuel at the pumps, high cost of living in the country.

Today, our economy lies in tatters having been plunged into an unsustainable public debt through reckless spending and excessive borrowing most of which have been spent on consumption by the Akufo-Addo/Bawumia government. Unemployment rate continues to raise and currently stands at 13.4%, the highest in nearly thirty years, despite championing lofty and grandiose rhetorics such as NABCO, YouStart, One District, One Factory, among others.

The fact that Ghana has a very youthful population, with the very active youth bracket between the ages of 15 and 24 years adding up to nearly over six million people according to the 2020 Population and Housing Census, should dawn on President Akufo-Addo that anything short of prioritizing an agenda to create sustainable and meaningful jobs will not be countenanced by the young people of this country.

Clearly, the youth of Ghana have long lost faith in President Akufo-Addo and can no longer take his empty rhetorics. Ghanaians in general can no longer identify with President Akufo-Addo and Vice President Alhaji Bawumia who continue to mismanage the economy and abuse the public purse with reckless abandon. They have no trust for leaders who continue to lie to them and have shown no genuine desire to address their worsening living conditions. This is the hard truth that the Akufo-Addo/Bawumia government must come to the terms with.

Any attempt to belittle the spontaneous angry protest of such a vastly heterogeneous crowd is to turn a deaf ear on the felt needs of the Ghanaian people. The mess that this NPP-Akufo-Addo/Bawumia government has brought upon Ghanaians will not be solved by farcical blaming of political opponents. It is about time government woke up to smell the coffee.