Home Politics ‘I’ll organise a demo against you if you don’t call the...
Facebook
Twitter
WhatsApp
Linkedin
Telegram
Print 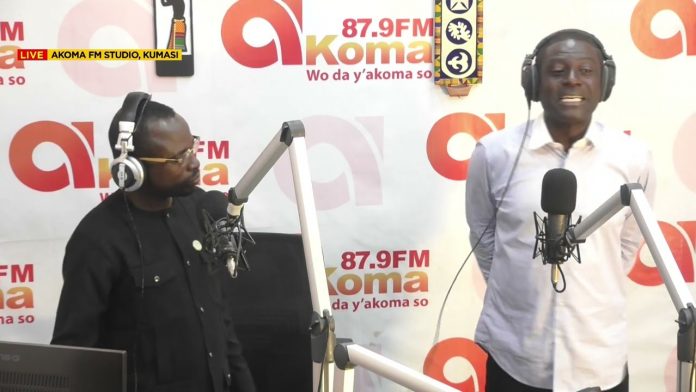 Co-host of Akoma Maakye, Captain Smart, has threatened to demonstrate against the Kumasi Traditional Council over lack of development in the Ashanti region come November.

The move according to him is to drum home the neglection of the Kumasi Development Agenda by the politicians for them to prioritise the infrastructural development in the region.

Captain Smart, on Tuesday, September 27, 2022, during Akoma Maakye morning show which is a merger of Onua Maakye and GhanAkoma co-hosted with Aduanaba Kofi Asante Ennin, sent a notice to the general public and urged for their support to hit the streets of Kumasi as a signal to tell the various traditional leaders especially the Kumasi Traditional Council to as a matter of urgency whip the politicians in line for them to sit up to accelerate the developmental drive in Asanteman and the region at large.

He called on the Kumasi Traditional Council to stop pampering politicians and ask them for development else they (politicians) will continue take the region for a ride.

“So since the traditional leaders have decided to pamper the politicians we have decided to demonstrate against them come November to drive home our grievances I’m sure with that they will understand our frustration,” Captain Smart had indicated.

The demonstration, if all things fall into rightful places is slated for November 2022. The duo called on the youth, unemployed graduates, concerned citizens and indigenes of Ashanti to come together and hit the streets to drive home their grievances.

‘We never forced Oyerepa to shut down’ – Kumasi Traditional Council