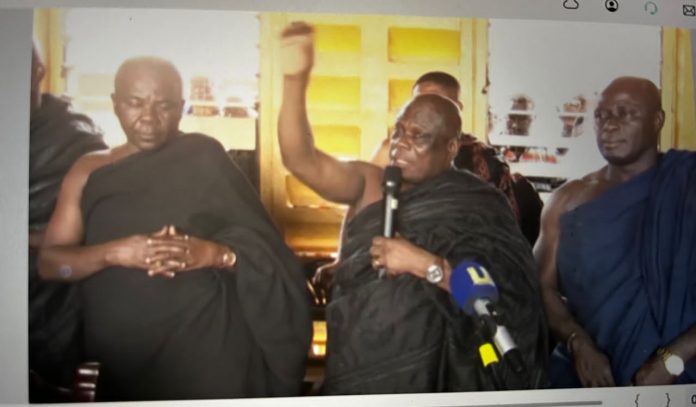 The Kumasi Traditional Council (KTC) has lashed out on the leadership of the Ghana Journalists Association for taking a stance on the melee between the Council and Oyerepa FM.

The GJA had issued a release over its intension to meet the KTC for suggesting to management of Oyerepa FM to shut down the station, which the association regarded as unlawful.

During the Association’s meeting with the Council Monday, August 29, 2022, some of the chiefs blasted the GJA and asked them to go to court if they were men.

“GJA, instead of coming to find out from us what really happened, you issued a release and to worsen matters. You said you’re coming to meet us because it is against the constitution to shut down a radio station.

“Our action was for their own safety and also to ensure such incident doesn’t repeat itself yet you issued a release. Then you should have gone to court. If you’re men, take it to court,” one of the chiefs had said.

Baffuor Nsuase Poku, chief linguist was also livid over the GJA’s approach, asking “why are you being so disrespectful? When it became tough you ran back to us. Some of you sat on various platforms quoting Acts upon Acts to suggest our action was illegal.”

‘We never forced Oyerepa to shut down’ – Kumasi Traditional Council