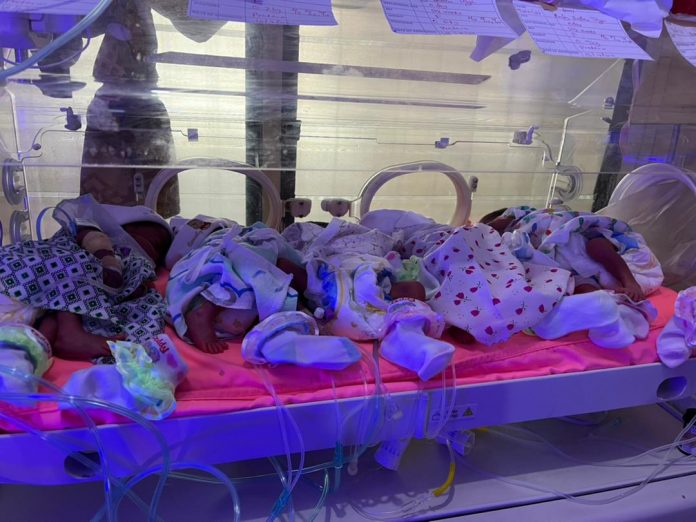 A 37 year old has given birth to quintuplets at the St Martin De Porres Hospital at Agormanya in the Eastern Region.

The 28 weeks old quintuplets were delivered through ceasarean session on account of placenta abruptio around 2am Wednesday, July 13, 2022.

They were conceived naturally by the mother and not through In Vitro Fertilization.

They weigh between 0.6-0.9kg , extremely pre term and needs to be in an incubator or have Kangaroo services till they weigh about 1.5kg which is an acceptable weight, Dr Miriam explained.

The St. Martin De Porres Hospital has just one incubator unable to support the babies who are pre-term.

The Hospital management said they would be referred to the Korle-Bu Teaching Hospital in Accra for further care especially when they do not have adequate incubators for them.

Head of the Newborn Intensive care Unit, Dr Dela Dennis, said although the birth rate is low and they are all on Oxygen with saturation rate between 97 to 100, they are doing well.

He noted, no early complications have been detected yet, but a possible late complication may occur which is normal in such births.

Dr. Dela indicated with the needed support, necessary items, their chance of survival is assured.

Grandmother of the quintuplets, Gladys Anobaah, is over joyed by the news. She described it as surprising and the divine will of God.

She appealed for support to care for the quintuplets.

The birth of the quintuplets is not the first in Ghana, but first for the St Martin De Porres Hospital at Agomanya.

The news of the babies got several patients and residents nearby to visit the NICU area to have a glimpse of the them.

The 37 year old mother is unemployed.

The quintuplets adds to two set of twin girls and a son making 10 children for the 37 years old mother.