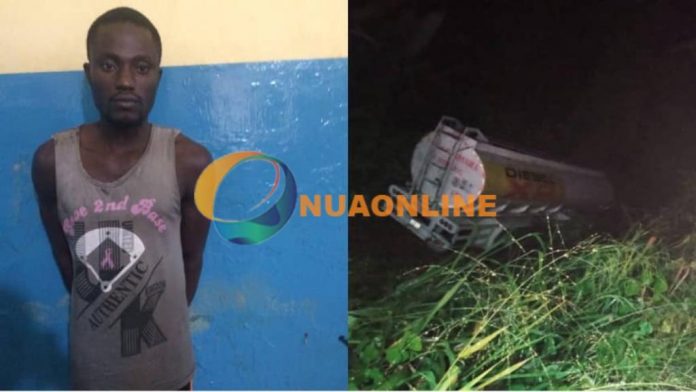 Driver of the Man Diesel Articulator Truck that crashed into the Vehicle of the Bibiani Anhwiaso Bekwei MCE and his driver has been arrested and charged on three counts.He fled after the incident occurred.

The first count is on careless and inconsiderate driving contrary to section 3 of Road Traffic Act 2004 ( Act 683, as amended by Act 2008 Act 761) and the other two counts are on negligently causing harm contrary to section 72 of the criminal offences Act, 1960 Act 29 .

He was put before the Kyebi Circuit Court presided over by His Honour Peter Oppong-Boahen.

The suspect driver plea was not taken. The Prosecutor Detective Inspt. Kamal Salifu Gumah prayed for him to be remanded into police custody as investigation has just commenced.

The Prosecutor Kamal Salifu Gumah, explained a case docket would be forwarded to the Atorney General’s office in Koforidua after investigation is completed for study and advice.

Police preliminary investigations indicate the 32 years old driver of the Articulator truck with registration number AS 4229 X was speeding and decided to suddenly apply brake on seeing vehicles ahead of him slowing down.

On board with his mate, they veered of its lane into the vehicle belonging to the Bibiani Anhwiaso Bekwei assembly resulting in the death of the MCE and his driver.