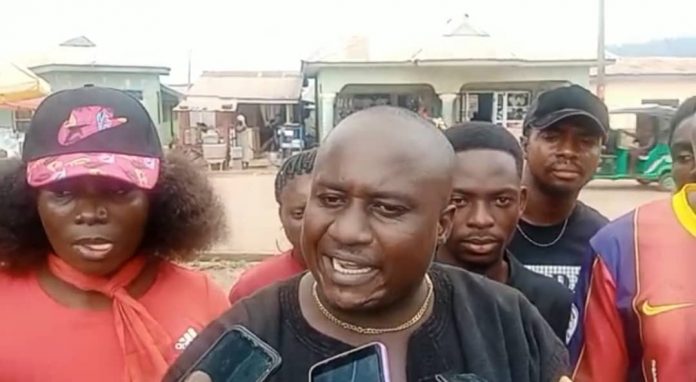 Sefwi Bekwai Youth Association, a pressure group at the Bibiani Anhwiaso Bekwai Municipality of the Western North Region is accusing the traditional authority and police for some foul play in an ongoing ritual killing case in the area.

Their accusations is with respect to the recent killing of 27-year-old Martha Tetteh who was beheaded after travelling from Kumasi to visit a spiritualist at Sefwi Bekwai.

The group is calling on the Inspector General of Police to ensure justice prevail for perpetrators of the crime to be brought to book.

The members have today, Thursday, July 28, 2022, attempted a black and red demonstration over the development to register their displeasure but was stopped by the police.

According to them, they were embarking on the protest to show their hands are clean over the killings in the area.

They say they won’t allow the chiefs and the police jeopardise the issue but be rather be tackled with the modicum of objectivity it deserves.

Convener of the youth group, Nana Kofi Kintoh addressing the media indicated the act of beheading and spiritual killings is damaging the reputation of Sefwi Bekwai and it’s natives and could affect the development of the area.

The suspects, Solomon Sam aka Paa Solo, John Nana Addai aka Akwasi Kokoreh and Osofo Atta aka Prince Atta have been remanded into police custody to reappear in court August 4, 2022.

Meanwhile, the headless body of the deceased has been deposited at the Bibiani Government Hospital for preservation and autopsy.

“We are disappointed in our traditional authorities and security for not allowing us to embark on this peaceful demonstration. We want the whole world to know that we are innocent of the ritual killings happening in this area”.

“We are therefore appealing to the IGP to help bring the perpetrators behind these heinous acts to book,” he lamented.