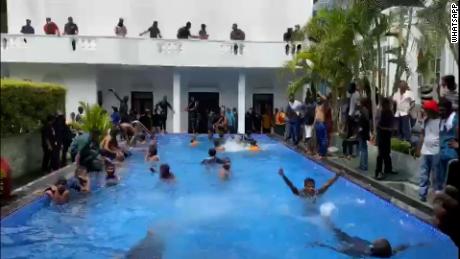 Outrage over Sri Lanka’s collapsing economy came to a boil on Saturday when tens of thousands of protesters stormed the colonial-era residence of President Gotabaya Rajapaksa and later set the prime minister’s house on fire.

The protesters, many holding the Sri Lankan flag, swarmed into Rajapaksa’s colonial-era fortified residence and the presidential secretariat.

Video images showed jubilant crowds splashing in the garden pool, lying on beds and using their mobile phone cameras to capture the moment.

Young protestors act out a wrestling match on a bed at the PM’s official residence. Much needed humour after a long day filled with tear gas and police brutality.#SriLankaProtests
from @BasnayakeM’s twitter pic.twitter.com/RBmD6rj7Ce

Some made tea, while others issued statements from a conference room demanding that the president and the prime minister go for mismanaging the nation’s finances, and for the crippling food and fuel shortages.

The protesters later broke into Prime Minister Ranil Wickremesinghe’s private residence and set it on fire.

Rajapaksa and Wickremesinghe were not in their residences when the buildings were attacked.

Security forces attempted to disperse the huge crowds that had mobbed Colombo’s administrative district earlier in the day, with dozens injured in the resulting clashes.

A spokeswoman for Colombo’s main hospital said three people were being treated for gunshot wounds, along with 36 others suffering breathing difficulties after being caught up in tear gas barrages.

Wickremesinghe announced his resignation but said he would not step down until a new government is formed, angering protesters who demanded his immediate departure.

Sri Lanka has suffered through months of shortages of basic goods, lengthy blackouts and galloping inflation after running out of foreign currency to import necessities.

The government has defaulted on its $51bn external debt and is seeking an International Monetary Fund bailout.