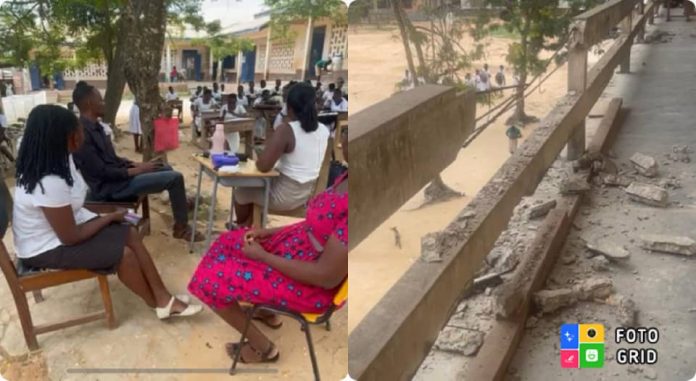 A Junior High School Form 1 student of the Shama Catholic School in the Western Region has been detained at the Shama Hospital after several chips of concrete of her school wall collapsed and fell on her while she was sweeping on Wednesday morning.

The case of Elizabeth Adams is among many similar incidents at the school where both teachers and students are in perpetual fear of the collapse of the whole school building.

Recounting the incident to TV3 News at the Shama Hospital where she is receiving treatment for her injuries, Elizabeth Adams said she was sweeping a staircase under the upper floor of her school structure when the concrete chippings hit her.

She was then rushed to the hospital and detained. When the news team visited the school, the place was in disarray. The pupils had been relocated under trees due to the incident.

Perhaps scared as well, the teaching staff had joined the students under the trees. Teaching and learning had been abandoned.

Some teachers and pupils recounted how they had narrowly escaped falling concrete chippings since the recent incident was apparently not the first time.

Whenever such incident happens, class has to be suspended for fear of the unknown.

When the news team got to the area where Miss Adams was hit, several concrete chippings were scattered on the floor and the stairs she had allegedly been sweeping.

The situation was worse in the classrooms. Deep and life threatening cracks had developed at almost every inch of the rooms.

The concrete beam in some of the classrooms had shifted and could cave in unannounced, with chippings from parts of the ceiling off.

Walls supporting the structure had also collapsed in support of accounts by teachers and students of the many incidents of falling chippings.

A four unit storey classroom block started in January 2021 has stalled. The school had hopes that work would not be interrupted to enable them relocate the students but the contractor wants his money first.

Another project by GETFUND started in 2013 has also been abandoned. Parts of the structure have collapsed with others hanging perilously.

Headmaster of the school, David Udoh reveals several letters to the education directorate have yielded no results.

According to him both teachers and students are in a state of fear as they do not know when a major collapse will happen.

They therefore sometimes alternate between the classrooms and under the trees on the school’s compound.

The headmaster fears Elizabeth Adams’ case will further heighten fears and is worried teaching and learning will be greatly affected going forward.

His wish is that the students are found a new place to avert a major catastrophe.

Until then the students numbering 418, including their teachers will continue to learn under trepidation.

At the time of filing this report, Elizabeth Adams was at the pharmacy unit of the hospital collecting medicine.

Authorities of the school were also on their way to a meeting with the District Director of Education.