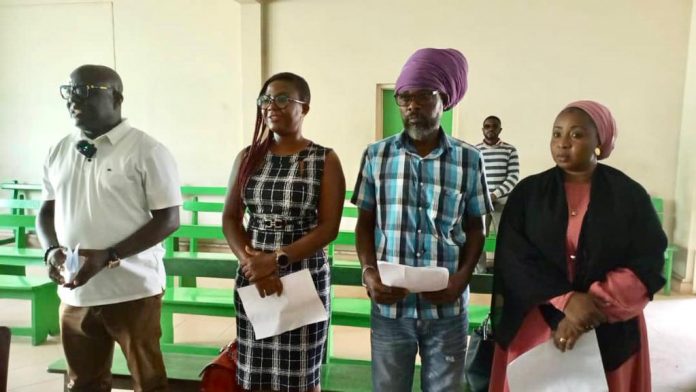 Newly sworn-in President of the Western Regional branch of the Ghana Journalists’ Association (GJA) Desmond Cudjoe is promising of a tenure that will see to it that journalism becomes an enviable profession.

He underscores the critical role journalism plays in the development paradigm of any country for which reason the profession should be one that hinges on professionalism and not sensationalism.

Mr. Cudjoe said this when he, together with other regional executives were sworn in on Thursday July 7, 2022 at the Sekondi Magistrate Court Complex by Her Lordship Rosemary Hayford.

The current leadership is made up of Desmond Cudjoe of the Ghana Broadcast Corporation (GBC) as the President, Kwame Mensa of EIB as the Vice President, Shirley Ewurama Smith of Media General as the General Secretary and Marie Aziz Tunde of GBC as the Treasurer.

Mr. Cudjoe expressed regret that over the years the standard of journalism in the country has been falling and fears things could be worse if pragmatic efforts are not made to stem the trend.

“I must confess that the standard has not been the best. You look at the stories and more of them tend to be about character assassination, full of malicious content, disregard for the basic ethics of journalism, some reporters go to programs uninvited and after fight organisers for ‘soli’. Some appear on radio or TV platforms and you can tell the person was ill prepared and so on and so forth”.

According to him, “these problems we see are because of the lack of the required training, poor renumeration, the thirst for cheap labour on the part of media owners resulting in the recruitment of unqualified personnel and in recent times politicians owning media houses.”

But he envisions a tenure in office where journalists will be guided by the ethics of the profession in all their engagements “if not everywhere in the country, at least in the Western Region”.

“So, what my team and I intend doing in the early stages of our administration is to first get a database of all journalists in the region, where they work, their qualification and the program that they do.

We will encourage as many as possible to register with the association. Then we will analyse the database to see the sour points. We will then look at collaborating with both local and international training institutions to help upgrade skills.

This training is going to be a regular one. There will also be a lot of symposia where we will invite companies to lecture members for them to know more about those companies. This way, when they are to report on them, they will do so from an informed position”.

For her part, the regional Secretary Shirley Ewurama Smith mentioned that another area that the new executives will also pay attention to, will be the welfare of journalists in the region.

“The welfare of members is so important especially for those on retirement. What you see is that because of the low renumeration, majority of journalists are not able to save enough to enable them have a good future. What we will be considering is an insurance system where members will contribute so as to help them when they are no more active”.

Portia Gabor of Media General is 2021 ‘Journalist of the Year’