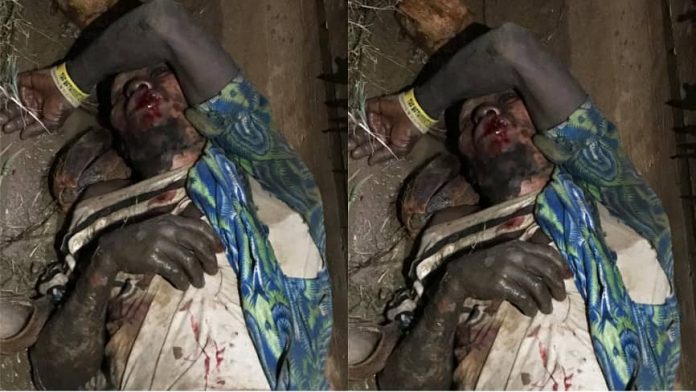 A young man believed to be in his early thirties has sustained life threatening burns all over his body after he attempted to steal control cables at Electricity Company of Ghana’s (ECG) Sub Station at Whindo in the Western Region.

In an interview with the Western Regional General Manager of ECG Ing. Emmanuel Justice Ofori Wednesday July 6, 2022 he said he was informed of an unsuccessful theft case at the Company’s Sub Station at Whindo.

He indicated the thief had attempted to steal control cables from a VT Control setup but got badly burnt in the process.

“The purpose of the VT setup is to isolate faulty areas, when there is a fault so that the total outage will be minimal. But for some time now, thieves are targeting the control cables in the setup. They have stolen from two Sub Stations at Windy Ridge, stolen from Airforce and Amanful.

“We have reported the matter to the police and were hoping that the culprits will be caught only for me to be called yesterday and informed about a failed attempt at our Sub Station at Whindo. The men I dispatched together with some police men took the thief to Effia Nkwanta Regional Hospital,” he detailed.

When the news team got to the Whindo Sub Station, two cables connected to the VT Control setup were hanging loosely. They have been cut with the copper lining popping out.

Western Regional Safety Manager of ECG Francis Tawiah Mensah who took the news team around the Sub Station implored residents to be on the lookout for any suspicious activities around ECG installations.

“Immediately, there is an outage in your area or your light becomes unstable try and go to where your Sub Station is and investigate. It could be thieves at work”.

Residents who witnessed the sad ordeal were not sympathetic, in the least, as according to them theft cases in the area, have been on the increase in recent times.

A livid resident told the news team the thief deserves what happened to him and prayed his ordeal will serve as a lesson to others who intend to steal ECG installations at its Sub Stations.

“I am getting to 60 years and I still work hard. I am currently working on the Chief’s house. All my workers are not from Whindo because the young guys here do not like to work. They will turn your offer down if you want to engage them. So, for me I will accuse them for this thievery. I’m sure that guy who was affected works with a gang and they have seen what has happened to him. It serves him right. Now, his other colleagues will think twice if they intend to steal again”.

The thief is currently at the Effia Nkwanta Regional Hospital receiving treatment. The ECG may have to bear his medical bills as he has not been able to speak for the past 48 hours.

The Whindo case brings the number of thefts of ECG installations at its Sub Stations to five in a spate of three months.

ECG says it will continue to educate the public to be on the lookout for persons who act suspiciously around its installations.

C/R: Dog barks to cause arrest of ECG cable thief