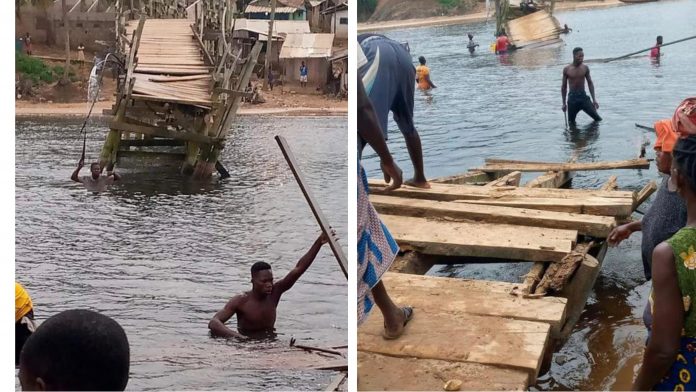 Hundreds of residents of both Old and New Akwidaa townships and nestling communities in the Western Region have been left stranded in their various communities after a bridge connecting them collapsed.

The residents including traders and especially school children have now been compelled to use an alternative road which is barely inaccessible and will require hours to trek on.

The Akwidaa Bridge measures about 200 meters and lies on the Eziley River. It connects the Old and New Akwidaa townships but also serves as an alternative route for residents in about six other communities close by.

There is an access road into the old Akwidaa community. But using it will mean residents would have to travel close to an hour on a road that is barely accessible and through thick forest.

But with the bridge, this tedious journey is done in less than five minutes especially for residents of old and new Akwidaa.

Over the years, the bridge has been gradually developing defects. Considering how important the bridge is, opinion leaders have been making fervent appeals on the Ahanta West Municipal Assembly and the Forestry Commission to help repair it. Unfortunately, there has been no response.

“We have written to the Forestry Commission to allow us go into the forest reserve here to pick some of the fallen and not too dead lumber and use them to repair the bridge. It has been more than a year and there has not been any response. We don’t get any form of royalty from the Forestry Commission. And so, we were thinking that this will be an opportunity for us to get something but we thought wrong”, Assembly member for Akwidaa, Emmanuel Bonney lamented.

The fear of the opinion leaders has come to pass. The bridge collapsed in the early hours of Tuesday July 5, 2022 leaving scores of residents stranded in their various communities.

Emmanuel Bonney lamented that all their options are gradually closing stressing that “as I speak, it has become difficult for the over one thousand people in the communities around who use the bridge to carry out their daily economic activities with ease.

He therefore made another appeal on the Ahanta West Municipal Assembly and the Forestry Commission to come to their aid for the affected communities to have their alas lives restored to normalcy.