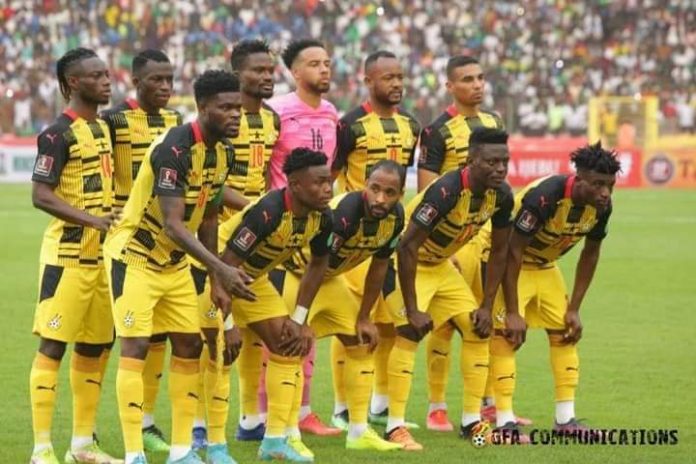 A much-changed Black Stars side were held to a 1-1 draw by the Central African Republic (CAR) in Luanda on Sunday afternoon.

Coach Otto Addo made seven changes to the team that easily defeated Madagascar on Wednesday in Cape Coast.

Mohammed Kudus, one of four players who kept their place, produced a beautiful finish to put Ghana ahead, but the CAR fought back and equalised through Karl Namnganda.

Despite Otto Addo’s numerous changes, the Black Stars dominated possession; however, their attack was blunt, and it took the brilliance of Kudus to put Ghana ahead in the 17th minute. The Ajax man capped off a brilliant move with a superb curling effort from outside the box.

Ghana maintained control of the game after the goal but failed to create any clear-cut scoring chances.

With ten minutes remaining in the first half, the Black Stars became complacent, allowing CAR to gain confidence and find the equaliser.

Midfielder Brad Thomas Pirioua intercepted the ball in the middle and played a brilliant through ball for Namnganda to score with a one-time finish.

The second half was largely one-sided, with the Black Stars controlling possession and CAR content to sit deep and rely on counter-attacks.

Kamaldeen Sulemana, Fatawu Issahaku, and Andre Ayew were all introduced to try to inspire a win, but CAR stood firm to snatch a point.

The draw is still a good result for the Black Stars, who remain top of the group after Angola and Madagascar drew 1-1.

Ghana lead with four points, Angola is second with four, and CAR and Madagascar are third and fourth with one point each.

Black Stars will now head to Japan for a four-nation tournament.