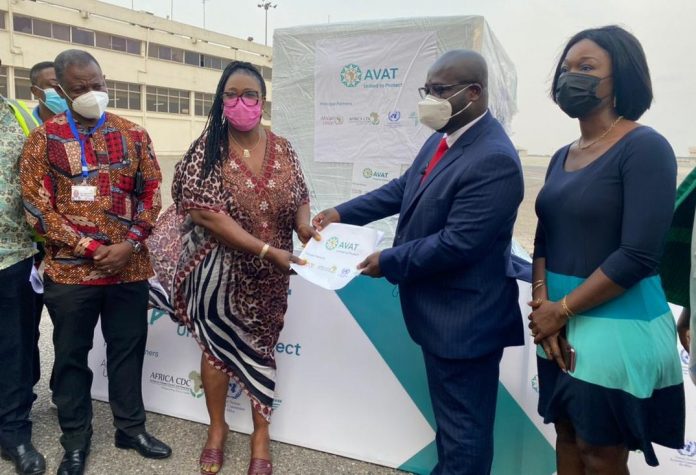 Ghana has received its first batch of the Johnson & Johnson vaccines under the African Vaccine Acquisition Trust (AVAT), a move initiated by the African Union (AU).

The 177,600 single-shot doses were received at the Kotoka International Airport (KIA) by a delegation led by Deputy Minister of Health Tina Mensah on Saturday, August 7.

“The Number One priority of the government of Ghana is to build a resilient healthcare system for the people of Ghana,” she said after receiving the vaccines from AVAT representatives.

“In this connection, the Ministry of Health has continuously initiated programmes and projects to improve the delivery of healthcare services.”

The AVAT initiative began distribution of the South Africa-made vaccines on Thursday, August 5 with Togo becoming the first nation to receive them.

In all, 400 million Johnson & Johnson Covid-19 vaccines are expected to be delivered to AU member states with 6.4 million in August and 50 million by December.

Ghana is entitled to 17 million vaccines.

The Africa Medical Supplies Platform in collaboration with UNICEF is providing logistical and delivery services for the distribution of the vaccines to the African nations.

The Johnson &Jonson vaccines are produced by Aspen Pharmacare facility in Gqeberha in South Africa.

Ghana’s Covid-19 mass vaccination, which began on Tuesday, March 2 as a result of the reception of the AstraZeneca vaccines from India, stalled due to shortages.

Efforts by government to procure Sputnik V vaccines from Russia led to the country entangling itself in a contract that never was. An Emirati middleman, Sheikh Ahmed Dalmook Al Maktoum, took monies at a unit cost of $19, almost double the factory cost, but backed out of delivering the full consignment.

The country has already started plans to establish a National Vaccine Institute (NVI) with a seed fund of 25 million for local production of Covid-19 vaccines in future.

Unemployed nurses give gov’t a week ultimatum to post them or take over the Jubilee House, other offices