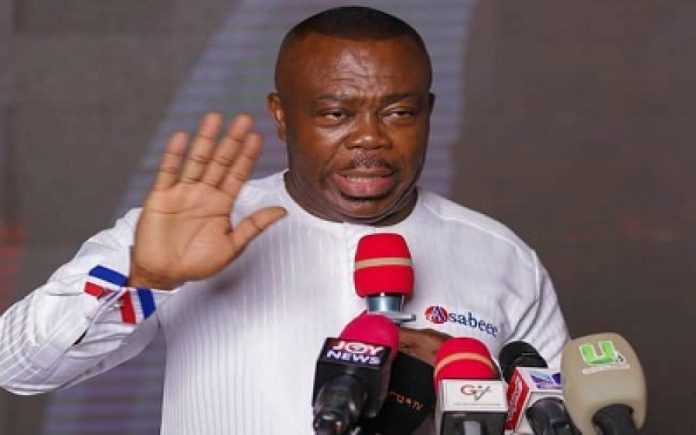 A National Chairman aspirant for the New Patriotic Party, Stephen Asamoah Boateng, aka Asabee has tasked the party leadership to call his opponents to order, for allegedly paying huge sums of monies to delegates.

He says even though he has given the delegates transportation, his counterparts are paying huge sums which will not auger well for the elections.

“At least I gave them transportation three times. I gave 150, another 150 a and 100. But others are going back. They want to influence the delegates. I don’t know where the money is coming from. Please stay focus. Remember 2024. You need a chairman that is focused, that has the energy. I’m here talking, where are the rest?,” he quizzed.

Meanwhile, the Conference has delayed for over six hours after it was scheduled to commence at 9 am.

It is half past 3pm and conference hasn’t started at the Accra Sports Stadium. Even though some aspirants and many of the delegates were around, the aspirants had to be called for two separate meetings.

Onua TV/FM’s Yaa Titi Okrah reports from the grounds that, an intelligence they’re picking indicate monecracy is delaying the process.

From her sources, aspirants applying tactics in paying the delegates ransoms based on what their opponents offered.

Former MP for Tema East, Daniel Nii Kwartei Titus-Glover who is aspiring for the National Organiser position says John Boadu, incumbent and aspiring General Secretary should be questioned for the whereabouts of the delegates.