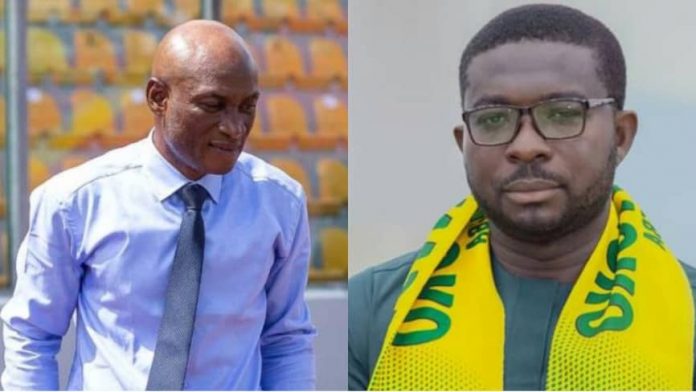 A Board Member of Kumasi Asante Kotoko Sporting Club, Yaw Adu, has disclosed the brouhaha between coach Prosper Narteh Ogum and the club is as a result of a friction between him and Nana Yaw Amponsah, the CEO.

After winning the 2021/22 Ghana Premier League for the Porcupine Warriors, Dr. Narteh Ogum was set for an exit, the cause for which was unknown.

It was earlier rumoured that the exit of Brazilian sensational, Fabio Gama was part of the reasons for the resignation melee.

But speaking on Akoma Sports Wednesday, July 20, 2022, the Africa Club of the Century Board Member noted all is not rosy between the Chief Executive Officer and the coach.

“Yes, it is a fact that there are some frictions between the two parties. This is one of the key reasons we will be meeting them on Monday to try and settle all differences,” he stated.

Mr. Adu assured the club’s fanatics that the any ensuing fracas would be resolved and should remain cool.

“I will appeal to the fans to stay calm as we bring peace between them and see the way forward especially our African campaign.

He, however, said “we will allow the coach to leave if he expresses the desire to leave and to him that decision is irrevocable.”