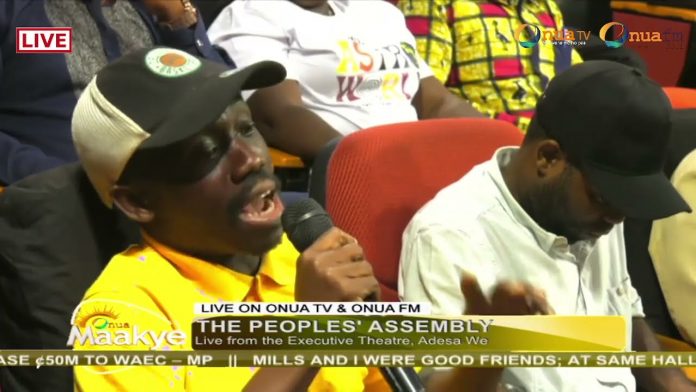 The financial sector clean up which collapsed several banks has rendered a former staff of Groupe Nduom jobless, running away from his child.

Philip Sarpiah, a resident of Ablekuma in the Greater Region says he was rendered unemployed after GN Savings and Loans where he worked was closed down.

Speaking on Onua TV/FM’s Peoples’ Assembly Monday, July 25, 2022, Mr. Sarpiah said the economic hardship has made him abandon his child who has been dismissed from school for two months now.

He prayed the Asantehene, the National Chief Imam and ex president Kufuor to intervene to revive the banks that collapsed so that the over 6,000 workers at Group Nduom alone would get their jobs back.

Watch him make his contribution amid tears with Captain Smart as host on ‘Maakye’.

‘Ofori-Atta kept our ball under your bed, we want to return to the field’ – Ex GN Bank staff to Akufo-Addo