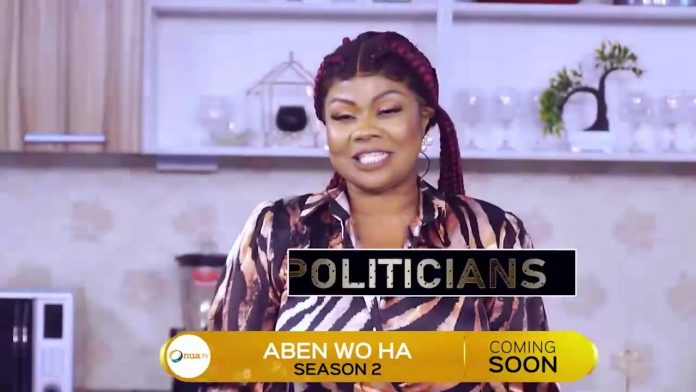 Those born before the mid to late 80s would resonate with the statement “Aben Wɔ Ha” as it was one of the legendary hits of high-life luminary, Charles Kwadwo Fosu, aka Daddy Lumba.

Since music is an art, the expression could be interpreted in many ways depending on how everyone understands it. Aben Wɔ Ha literary means ‘It is cooked here or food is ready here’. Many, however, believed the statement had a complete whole meaning in Lumba’s song as it was subject to different interpretation.

But Onua TV gives you the real meaning of the statement without any ambiguity. Food is indeed ready here!

The season two of Onua TV’s Aben Wɔ Ha premieres this July with a complete touch of class, education and entertainment, interspersed with fun to bring home the meaning of our slogan, “Yɛ Dwene Woho Paa” to our viewers. Even though culinary shows are usually entertaining, what the second season of Onua TV’s reality show brings you is different.

Usually, most of the cooking shows we know are characterised with preparing dishes and chatting amidst it. So what really does this season entail that is exceptional?

The show is specifically made up of people with showbiz background, to be hosted by the amiable and versatile gospel artiste, Empress Gifty.

Each episode of the season is categorised into three sessions.

The Chatroom: The first segment of the show is the Chatroom where our guest and host sit together and talk about life and industry. Usually, cooking shows are inundated with chit chats about the background and career journey of personalities that come on it. But the uniqueness with Aben Wɔ Ha is the didactic, inspiring, educative and life changing nature of the chatroom. The discussion is not just about a mere conversation but rather a duly planned dialogue tailored to impact viewers on some challenges confronted by these personalities and how they overcame them. Aside from the challenges, the positive sides of life will also provide inspiration for someone out there who thinks certain things are undoable, considering the hurdle before them today.

From the Chatroom, the action moves to the Kitchen where the real action takes place. Because there have been time to discuss what there is to know about the guest already, the Kitchen avoids the usual biography of celebrities who appear on almost all cooking shows whilst preparing a dish. Rather, any form of dialogue here is centred on the dish itself. What makes up the delicacy under preparation? The ingredients would be detailed as well as the effort that goes into the preparation of the respective meal itself.
After the cooking comes what I call the ‘testing committee’ who tells viewers how the food tastes. With Aben Wɔ Ha, the Adesa Production Limited (APL) that is in charge as part of the production spots a needy person(s) who are gifted with the meal at the end of each episode. That again, is an affirmation of our slogan, ‘Yɛ Dwene Woho Paaa!!!.’

Last but not least and rather the most interesting session, is when the programme zooms to the part of the show where viewers are given what went on at the backstage. Behind the Scenes. The fact that someone comes on set to prepare something he/she is very conversant with doesn’t mean they find it that easy. Aben Wɔ Ha Season 2 will give you shots of celebrities who came to cook but couldn’t slice common onions. Those who came to prepare banku but the entire craft of stirring the dough was so alien to them.

Okay, between the tall and short ‘Keche’, the two hip-pop artistes, who is the master of the kitchen and who is more experienced in ‘bedmatics’? Between Guru, Papa Shamo and Multimedia’s KMJ, whom do you think will beg the host to steam his tilapia for him before the cooking could continue because he had no clue on how to do it? All these and many other funny and interesting moments will be captured from July after the Season 2 launch of Aben Wɔ Ha, with the Ghanaian gospel music sensational, Empress Gifty.

Watch the promo below.