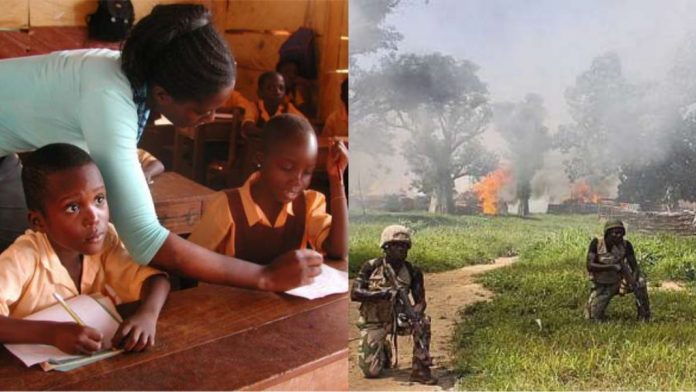 Since the renewed clashes of the Bawku conflict in November 2021, teaching and learning in the Bawku municipality has adversely been affected.

Thousands of pupils and students have abandoned the classroom, teachers fled for their lives and academic performance of school children has dwindled.

The recent security measures taken by the Upper East Regional Security Council and the Bawku Municipal Security Council have worsen the plight of teachers, pupils and students in the municipality with the temporal ban on commercial tricycle known as “yellow Yellow”.

In May this year, Onuaonline visited some of the schools to find out the effect of the conflict on education.

The head teacher of Gingande JHS, Abubakar Issah explained how the conflict is affecting them and how the stray bullets hit the school block in last week’s shootout.

“Just look at these gunshot marks on our school buildings. Assuming we were in school that day, many young lives would have been recorded which will be a blow to us. We are not safe anymore and the conflict now does not respect anybody so we are pleading for security or all the teachers will take transfer as many have already done,” he stressed.

The head teacher said eight out of fourteen teachers in the school have taken transfers and left Bawku and there is pressure on existing teachers to handle the whole school.

Mahama Ramatu, theheadteacher of Gingande primary school also reiterated their ordeal in carrying out their responsibilities as teachers whereas the conflict has eaten deep into the academic performance of the pupils.

Twenty more teachers have currently presented their letters of transfer from Bawku and awaiting approval.