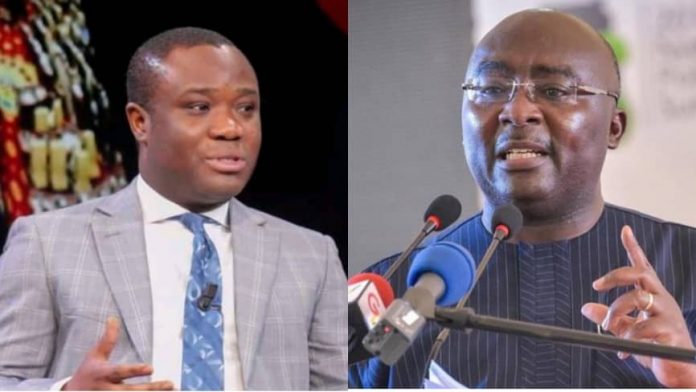 A former Deputy Minister of Information, Felix Kwakye Ofosu has reacted to the decision by the government to go to the International Monetary Fund (IMF) for support.

He said he can imagine the fear that has gripped the head of the Economic Management team, Vice President Dr Mahamudu Bawumia following the decision.

“I can only imagine the panic that has gripped Bawumia following the announcement of an IMF program by his bungling government,” Mr Ofosu Kwakye tweeted on Friday July 1.

I can only imagine the panic that has gripped Bawumia following the announcement of an IMF program by his bungling government.

President Addo Dankwa Akufo-Addo has instructed his Finance Minister Ken Ofori-Atta to commence formal engagements with the International Monetary Fund (IMF) inviting the Fund to support an economic programme put together by the Government of Ghana.

This follows a telephone conversation between the President and the IMF Managing Director, Miss Kristalina Georgieva, conveying Ghana’s decision to engage with the Fund.

The Ministry of Information announced this in a statement on Friday July 1.

On Monday June 27, a leading member of the governing New Patriotic Party (NPP), Gabby Otchere Darko said that in principle, he was not against the IMF programme.

Gabby explained that he is not for an IMF programme that gives the country peanuts but imposes conditions that will end up hurting the poor, jobs and businesses more.

In series of tweets he said “Am I against an IMF program in principle? No”

“I am not for an IMF program that throws peanuts at us but imposes conditions that will end up hurting the poor, jobs and businesses more. Covid-19 and War in Ukraine are not of Africa’s doing but more to our doom. A program that pretends it is all our doing is doomed to fail.”

“We do something that will inject confidence in our capacity to ride this heavy storm and that something should happen pretty quickly. Are you against an IMF program?”

The Finance Minister, Ken Ofori-Atta, has insisted that Ghana would not go back to the IMF for support.

In his view, the government has put in place measures including salary cuts and others, and also programmes to deal with the fundamental issues affecting the economy.

Mr Ofori-Atta said these when he was asked by expatriate journalist whether Ghana would consider going back to the IMF, at a press conference in Accra on Thursday May 12.

He said while answering the question that “All the white folks are just interested in us coming in the IMF programme. I always wonder why.”

“We are members of the fund; there are two major points of interventions that we have from the fund. One being the advise that we get because of the phenomenal expertise that the fund has and then secondly, these programme interventions which bring us some resources.

“I think, if you see from the budget that we constructed for 2022 and the subsequent announcement that we have done, clearly, the issue of Ghana having the capacity to think through the consolidation exercise exist. Also discipline itself with regards to the 20 per cent, etc, that we have shown clearly.”

He further indicated that “We have committed to not going back to the fund because in terms of the interventions and policy we are right there, the fund knows that we are completely in the right direction. The issue is, validating the programmes that we have put in place and then, in my view, supporting us to find alternative ways of financing or re-financing our debt, reprofiling it.”