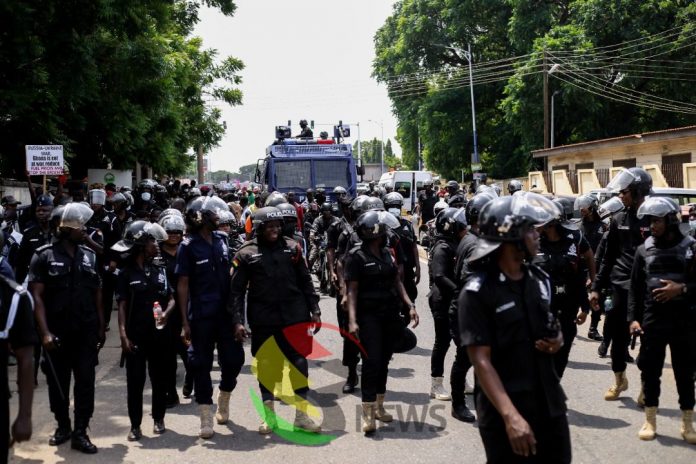 A Research Officer at the Kofi Annan International Peacekeeping and Training Centre (KAIPTC), Mustapha Abdullah, has indicated the Ghana Police Service overreacted at the Day One of the Arise Ghana #KromAyɛShi demonstration.

Juxtaposition of events that marred the first day of the two-day protest with the harmonious and peaceful nature of the second day spells the overreaction on the part of the law enforcement agency according to Mr. Abdullah.

Commenting on the two days protest on Onua TV with Captain Wednesday, June 29, 2022, Mr. Abdullah blamed the police’s unprofessionalism for poor control of the crowd for the chaos on Tuesday.

“In my own observation, I think the police overreacted yesterday. Even though the judiciary has ruled they use a particular road. The police action brought the chaos yesterday. I hope they have learnt a lot to properly manage future demonstrations well,” he said.

He attributed the actions of the police to the government regarding the repercussions of repetitive demonstrations on authority.

“The economic hardship currently is having an impact on citizens. The more people demonstrate the more the NPP current government becomes unpopular. That is one of the security concerns why even though the police want to be professional, but they are unable,” he disclosed.

He, however, advised that “overreacting in this manner without being professional also has its own consequences. So what’s necessary is for them [Police] to guide them [demonstrators] because if one accumulates grievances without letting them out, it also has its problems many at times so the police need to balance their act.”

Scenes of violence acts were recorded on Tuesday during the demonstration when the police and protestors locked horns on the route and destination of the protest which had ended in court prior to the event.

The police, in retaliation to stone pelting by the demonstrators fired teargas where 19 persons were arrested in the process.

The police said they were going to arrest leadership of the group that organised the demonstrations.

One of the organisers of the protest, Joshua Akamba had reacted saying they were also going to press charges on the police.

Mr. Akamba added the police must be cited for contempt.